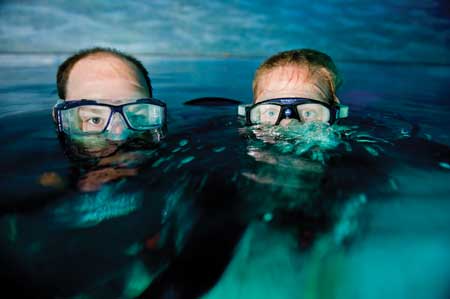 Nurses Have a Swimmingly Good Time

Calypso, a 490-pound green sea turtle, is a big ham, says Ed Carter, BSN, RN, CCRN, a volunteer diver at Baltimore’s National Aquarium. Carter once sat with her for 10 minutes at the bottom of a seven-foot deep pool, scratching her shell in front of the underground viewing windows while visitors took pictures. “She was just looking around and posing,” he says. “Animals have amazing personality.”

Laura Jansen, BSN, RN, a six-year diver at the aquarium, says her most memorable moment came on a routine-physical day. While a shark lay cradled in a hammock harness, an aquarium staffer inserted a needle into its thick skin several times to draw blood for lab tests. She pricked behind its dorsal fin and retrieved a sample. “It was really neat [to see],” Jansen says.

Carter and Jansen, long-time recreational divers and nurses in The Johns Hopkins Hospital’s Cardiac Surgery ICU and Adult Emergency Department, respectively, both say that their biweekly aquarium dives are a valuable stress reliever from their sometimes hectic days at work.

Carter and Jansen begin their eight-hour shifts by chopping up seafood, such as shrimp and mackerel, for the animals. Then they dive in two exhibits: Wings in the Water, a 260,000-gallon pool where Calypso, stingrays, and sharks live; and the Atlantic Coral Reef, a 335,000-gallon tank that houses 500 tropical fish. They feed the animals, observe their behavior for the aquarists, and administer medication when needed.

Carter says that interacting with underwater animals this closely is rare in the wild. “They take off as soon as they see you,” he explains. “It’s an experience that most divers don’t get to have.”

For Jansen, volunteering at the aquarium is a way to indulge her passion for scuba diving. “It’s a big release for me,” she says. “This was my thing before I was a nurse. It’s always been something I do.”