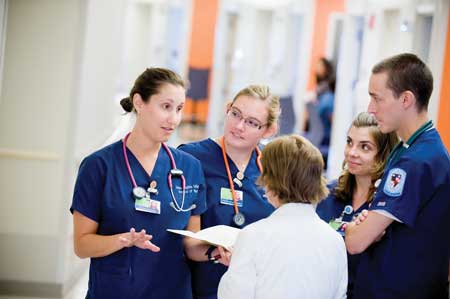 An accelerated degree program with a clinical residency is the fast track to nurse leadership.

After spending more than two years with the Peace Corps in Ethiopia and volunteering with the international children’s medical charity Operation Smile, Sean Czaja knew the impact nurses can have on patients and a population—and that he was ready to become one. 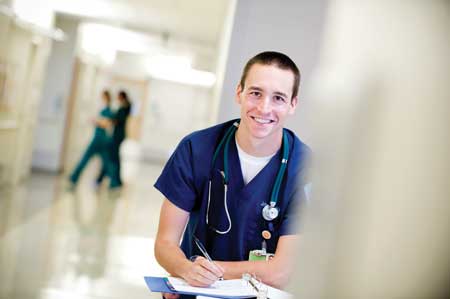 With the Johns Hopkins University School of Nursing’s Accelerated BS-to-MSN with Clinical Residency, Czaja found a dedicated path to that dream. He joined a handful of elite students with diverse backgrounds who share a common goal: to gain the experience they need to become leaders in their field.

“I loved what nurses did,” he says. “Doctors don’t have the same patient interaction. It’s just a completely different patient experience.”

Armed with their previous education and work background in healthcare, the students are fast-tracked through a bachelor’s degree and into a clinical residency at one of the hospitals in the Johns Hopkins Medicine network. There they gain necessary hands-on knowledge before pursuing the advanced degree that will prepare them to be nurse leaders.

“They are looking for a program that will utilize some of their experience,” says JoAnne Flagg, DNP, CPNP, IBCLC, program director and assistant professor at the School of Nursing. Most of the students have considerable schooling or work experience under their belts, she adds, and here they can jump right into their passion, continuing learning while working in a paid clinical residency.

Funded by a five-year grant from the state of Maryland, the program also meets the state’s need to increase the number of experienced nurses at the bedside, Flagg explains. These will be master’s-prepared nurses, groomed to be leaders in the hospital setting.  As the patient population grows older with more complex needs, the state’s hospitals need more clinical nurse specialists who can apply evidence-based research to improve patient care and who are prepared to teach future nurses.

“We need nurses with these complex skills,” says Elizabeth Jordan, DNSc, RNC, assistant professor and director of the school’s baccalaureate program. “This is a program that allows them to develop those skills as a clinical nurse leader on the unit and to develop that expertise along the way.”

Developing leadership through clinical experience is a familiar approach at JHUSON, and one shared by the Clinical Academic Practice Partnership program. Through this clinical opportunity, undergraduate students in their clinical rotations work closely with a nurse preceptor, actively integrating into the professional environment.

“It’s innovative nursing education that allows us to maximize clinical opportunities to educate and skill up our nursing graduates,” says Jordan.

Programs like this aren’t for the faint of heart, and in the accelerated nursing program, the students are carefully selected based on their GPAs, written essays, work experience, and an interview. They take some graduate-level courses while earning their bachelor’s, but the small classes and tutoring support make it manageable. And each of the six students in the first cohort passed their NCLEX the first time.

Czaja, a Batavia, New York, native who studied developmental cell biology on the pre-med track, says he welcomes the intense pace. After his previous international experience and time spent conducting clinical research at a medical center, he was ready to get started on his goal of becoming a nurse leader.

He says he wants to work abroad again, helping shape patient care—as well as his career.

Czaja’s classmate Catherine Ogunsola also wanted more of that patient interaction and education she wasn’t getting as a trained physician. Even as she applied for a residency position in the United States, Ogunsola felt like something was missing for her in a career as a doctor. Her pursuit of a master’s in mental health allowed her to follow her interest in research, but that too didn’t give her the fulfillment she wanted.

The accelerated nursing program combined all her passions and is allowing her to take a holistic approach to patient care, she says.

“As a nurse you’re an educator, you work with patients; you’re the one who knows the patient,” says Ogunsola, adding she wants to apply her clinical and research skills in gerontology.

For Katrina Zeigler, the dream of working with patients has already become a reality, as she’s now working as a labor and delivery nurse at Howard County General. Zeigler graduated with her bachelor’s degree in December, and started the clinical residency in February.

“It’s been a big learning experience, but I think my program prepared me well for it,” she says of her clinical residency, adding, “I was willing to work hard to get into the field.”Zeigler, who brings to her residency experience volunteering at a hospital in her native Florida, is working her dream job. “I think I have the best job in the world,” she says. “I really could not be happier.”

Howard County General Hospital is also benefiting from the match. Debbie Fleischmann, MPA, BS, RN, NEA-BC, the Hospital’s director of clinical education, notes that the students selected for Hopkins’ accelerated programs tend to be “very high-caliber and very committed to being successful,” and Zeigler is no exception.

To facilitate that success, the Hospital provided a six-month orientation and minimized the number of preceptors working with Zeigler to better foster skill development. “The opportunity to have that student have a commitment to the organization during a time when they are young and growing their career gives the graduate and the hospital a chance to grow their knowledge base,” says Fleischmann.

Zeigler’s classmate, Fatuma Mawanda, envisions a day when she can run a clinic, perhaps in Uganda where she was born. With an advanced nursing degree — as well as her master’s studies from the John’s Hopkins Zanvyl Krieger School of Arts and Sciences — Mawanda will be able to put her research skills into action to improve healthcare conditions.

Mawanda starts her residency on a general medicine floor at Bayview this spring. The paid clinical residency couldn’t come at a better time, Mawanda says. Knowing she has a position lined up allowed her to focus on the intensive studies.

“You can get your stuff done, have the experience, and have comfort to know you have a job waiting for you,” she says.

Though Mawanda’s three-month orientation at Bayview just started, her preceptor Tara Kerby, RN, CMSRN, says she can already see how Mawanda’s previous education and experience set her apart. She’s picking up concepts much faster than a new grad might, putting her months ahead of younger, less experienced grads.

“Her critical thinking skills are there already, and the time management seems to be on point,” Kerby says. “You can see the maturity level, and the internal drive is different. It’s definitely apparent.”

With a 100-percent NCLEX pass rate (on their first attempt!), the first cohort of students in the accelerated BS-to-MSN with Clinical Residency program are on the fast track to nursing career success. After passing the nursing National Council Licensure Examination (NCLEX), these six students have now moved into the clinical residency portion of their program. Their achievement adds to that of other Hopkins Nursing graduating classes that, since 2009, have achieved stellar NCLEX pass rates on both first (96 percent) and second (100 percent) attempts.