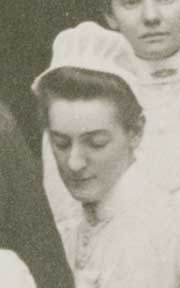 In 1907, when M. Adelaide Nutting appointed Ada M. Carr, class of 1893, as a full-time instructor in the Hopkins Training School, it was an innovation in the field of nursing education.  Previously, nursing students were taught by nursing staff members—who also carried heavy administrative duties—or by physicians.

This was not the first time Carr was a trailblazer. Upon graduation she became a head nurse, and in 1897 Nutting appointed her to assistant superintendent of the Johns Hopkins Training School for Nurses. She left Hopkins later that year to become superintendent of the Instructive Visiting Nurse Association of Baltimore and led its expansion from a single visiting nurse to six nurses who provided home care to patients. She also organized classes for poor and under educated Baltimore residents to help them gain employment.

Before her interests led her to the public health field, she gained significant nursing experience. In addition to her positions at Hopkins, Carr held superintendent of nursing positions at hospitals in New York City, Rhode Island, and New Jersey.

Carr’s sister recalled that Ada was rarely seen without a book. She also wrote poetry, which frequently found its way into the alumnae magazine, along with the many other articles she wrote.