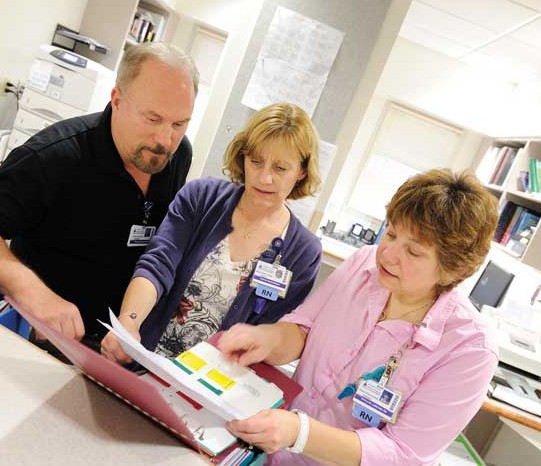 Health education has become a widely popular subject in recent years, but there’s one area of the health sector that remains somewhat of a taboo topic: psychiatry. That hasn’t prevented Tom Schmidt, BSN, RN, nurse manager of Howard County General Hospital’s (HCGH) Psychiatry Inpatient Unit, from establishing both community- and hospital-based speakers bureaus on the topic. In fact, it’s fueled his ambition.

“Psychiatry always has been behind closed doors. Nobody really knows what we do or how we do it. My group is very experienced; most have been here 20 or more years. I thought, let’s share our experience,” Schmidt explains.

Combining his expertise as a public speaker with his desire to promote the knowledge of HCGH’s psychiatry unit staff members, Schmidt decided about a year and a half ago to launch the hospital/community speakers bureau. It’s been well-received by community members and HCGH staff alike.

To date, inquiries for lectures by the community speakers bureau have varied greatly by subject and audience. Two senior groups affiliated with local church organizations have requested and heard lectures on topics relevant to their demographic: sleep disturbances and spirituality in aging. On the other side of the spectrum, the community speakers bureau also has responded to inquiries from school groups.

For parents of middle school students at an area public school, Sue Morseman, RN, staff nurse in HCGH’s psychiatry department, led a talk about growth and development among adolescents. She addressed tough topics on the minds of parents, explaining why adolescents tend to make impulsive choices—their brains aren’t fully developed yet—and how to guide them to make good ones. “It’s fun to be out in the community. That’s the people we serve,” Morseman says.

But it’s not the only group the bureau serves. HCGH staff members have benefited from guest lecturers too. “We started with one of the hottest, most dangerous topics: alcohol-withdrawal seizures, which can be fatal,” says Schmidt. Alternate addiction counselor, Sheryl Dulsky, RN, discussed the topic with HCGH staff members during three separate shifts so that all employees had an opportunity to attend.

Schmidt’s inclusive attitude inspires his in-house bureau topics. For instance, he explains that while some might look at medical-surgical nurses as requiring a completely different skill set from psychiatric nurses—the former thrive on task completion, the latter on relationships with patients—Schmidt sees room for crossover. “Medical-surgical nurses need to know how to assess behavioral change, aggression, cognitive decline, things like that,” Schmidt says.

Schmidt and other members of the Psychiatric Unit step in to bridge that gap.

“I’ve always been a public speaker. I’m happy to get back into the role,” Schmidt says.