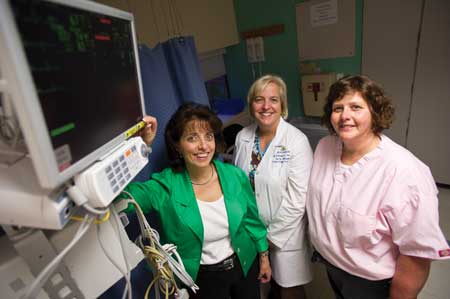 It may seem counterintuitive to say that fewer monitor alarms can actually improve patient safety, but that’s exactly what happens—at least, when priorities and delays have been structured to ensure that urgent alarms can be heard amid the noise of a busy unit.

Maria Cvach, MSN, RN, CCRN, saw firsthand the effects of “alarm fatigue,” when unit staff are so overwhelmed by incessant and similar-sounding alerts that it becomes difficult to pick out the most critical ones. Starting in 2006, she has been co-leading an evidence-based practice on alarm management in order to reduce unnecessary alarms and to discover and establish the best defaults for monitor alarms throughout The Johns Hopkins Hospital.

“Most cardiac monitor alarms are false-positive or clinically insignificant,” explains Cvach, who is the assistant director of nursing, clinical standards, in the Department of Nursing. “They’re caused by things like patient movement. Usually they’ll self-correct or be silenced by the bedside nurse within about sixty seconds.”

The Hospital is looking to introduce new alarm software in the future. At that time, Cvach and her team plan to add algorithms, prioritize alarms, and set delays for the four types of alarms: crisis, warning, advisory, and system warning. Crisis alarms will go immediately to the nurse’s pager, while warnings and system warnings (the ones most likely to be false alarms) are put on a sixty-second delay before they’re sent, and advisories are classified as low priority and not sent to the pager. This means that when an alarm hits a nurse’s pager, he or she knows it requires immediate action.

This past October Cvach attended a medical-device alarm summit put together by the Association for the Advancement of Medical Instrumentation (AAMI) and presented her team’s findings about the effects of daily electrode change on the reduction of nuisance alarms. Her team discovered that changing electrodes daily to prevent them from drying out reduced the number of warnings, advisories, and system warnings by almost 50%. Based on this quality-control project, the Cardiac Monitor Protocol was updated to include this practice.

On units that have adopted the new monitor defaults, the number of monitor alarms has been reduced by 25% to 75%. Through a combination of improved monitoring systems, evidence-based defaults, and best practices like daily electrode change, Cvach believes that Hopkins nurses will be able to rely on monitors to deliver truer and actionable alarms that will reduce alarm fatigue.