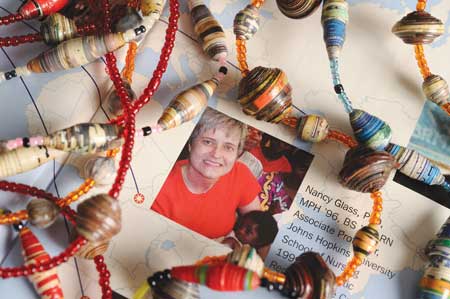 A Familiar Face in an Unexpected Place
by Pamela McComas

While a picture may be worth a thousand words, a picture of School of Nursing associate professor, Nancy Glass, PhD, MPH ’96, BS ’94, RN, is also worth income for women in Uganda.

This past June, Traditional ’11 students, Jacqueline Brysacz, Emily Johnson, and Janet Lawson, who were participating in the School of Nursing’s International Transitions Practicum program in Uganda, took a weekend trip to Queen Elizabeth Park located along the Uganda/Democratic Republic of the Congo border. In an email sent to Glass, Brysacz describes the experience, “…on our last morning there, a women’s group came to our camp and gave a class on making paper beads and basket weaving. They had a stack of magazines that they use for cutting and making beads, and we noticed that Peace Corps Worldview was among the stack. Turns out they had worked with a Peace Corps volunteer to develop their women’s group and they were really excited to know we had worked as Peace Corps volunteers with women. I opened up the magazine and saw that Hopkins has the first page of advertising. So, we talked with women about our program and said that we knew some of the people whose photos are on the cover. We saw your photos and told them that you are our teacher. The women laughed and said, ‘Ah! We are making beads with your teacher’s face!’”

Glass was tickled to receive the email. When asked about having her photo turned into jewelry she says, “I thought it was fun that the magazine was being used in innovative ways, including income generation for women. I give it to the Peace Corps volunteers who know how to use all the resources available to them to make something positive happen.”