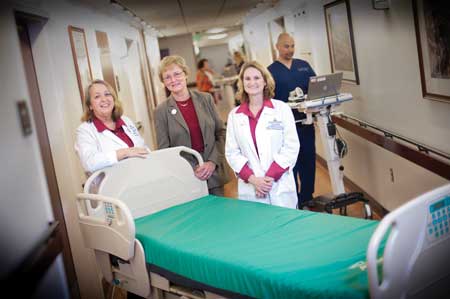 Organizational culture related to pressure ulcer prevention has undergone a positive transformation at Johns Hopkins Bayview Medical Center. Under nursing administrative directives and the leadership, mentoring, and clinical expertise of Rachel Moseley, BSN, RN, and Cindy Walker, BSN, RN, both certified wound/ostomy care nurses, skin care has been uplifted to that of airway, breathing, and circulation.

In 2009, the National Database of Nursing Quality Indicators (NDNQI) statistics indicated that Hopkins Bayview’s rate of hospital-acquired pressure ulcers was higher than the national average for similar-sized teaching hospitals. This news coincided with an expectation from Mary Ann Greene, DNP ’09, RN, NEA-BC, director of nursing for nursing professional development, that all of her staff develop an evidence-based practice (EBP) project based on a literature review of research and best practice.

Working in parallel and motivated by a desire to have a positive impact on patients’ lives, Moseley and Walker focused their projects in the area of nursing care that needed attention and was within their purview: pressure ulcers. “We wanted to improve our pressure ulcer rates and patient satisfaction,” says Walker.

Pressure ulcers can range from superficial areas of redness to full thickness wounds that extend to the bone. These wounds can significantly affect a patient’s quality of life. Patients most likely to be affected by pressure ulcers are often immobile, malnourished, incontinent, diabetic, or lacking in sensation. “Prolonged hospitalization puts these patients at risk and makes them vulnerable to multiple infections,” says Greene.

Collaborating with the Surgical Advisory Board comprising of nursing leadership, Moseley found that the support surface protocol then in place created barriers for the nursing staff. A chart review showed a significant time lag between finding a patient at risk for developing pressure ulcers and placing that patient on the correct surface. At the time, Hopkins Bayview used many different types of mattresses, depending on the patient’s condition. The protocol required the patient to be removed from their current mattress and have a new rental mattress placed. This change may be uncomfortable for the patient and time-consuming and labor-intensive for the staff. Through a literature review, Moseley found that no evidence supported the use of one specific type of mattress over another for the prevention of pressure ulcers.

Replacing the hospital’s mattresses seemed to be a solution. But Moseley dug deeper. Using a survey, she sought the expert opinion of her peers at Magnet hospitals along the eastern seaboard to determine the best-performing mattresses. She also researched cost. According to the American Journal of Surgery, the average hospital cost for eleven patients with stage IV pressure ulcers and related complications was $129,248 for hospital-acquired ulcers during a single admission. These figures helped Moseley make a business case for the procurement department to replace all 228 of the medical-surgical unit’s mattresses in favor of one standard type of mattress that can accommodate most patients, including those with stage I and stage II pressure ulcers. She estimates that this change will save the hospital $300,000 over a five-year period. Hopkins Bayview will continue to rent special mattresses for those with stages III and IV pressure ulcers and for those with paraplegia or quadriplegia.

Walker, meanwhile, working with the Medical Advisory Workgroup, developed a skin care bundle that coordinated with the Braden Scale—a commonly used tool that assists in identifying patients at risk for pressure ulcers. The streamlined pressure-ulcer prevention protocols included specific prevention interventions if the patient was found to be at risk for developing pressure ulcers according to the Braden Scale score. The skin care bundle was based on EBP, involved multiple disciplines, and reformatted electronic documentation screens.

Less than a year after introducing the new skin-care bundle in January 2010, the prevalence of pressure ulcers among Hopkins Bayview patients has declined by an average of 6.49%. Moseley and Walker attribute this positive outcome to a number of initiatives, including comprehensive staff education and an awareness campaign that was rolled out to all nursing units. The campaign was built on the fundamental ABC (Airway, Breathing, Circulation) protocol that’s been around for decades. To that the Skin/Wound Resource Team and its champions added an “S” for skin and distributed buttons imprinted with the slogan, “ABC’Skin Holds It All Together” as a visual reminder to follow the new protocol.

The Resource Team also offered in-service training to the Physical and Occupational Therapy, Respiratory Therapy, and Escort Service departments. “We wanted to get away from the idea that nursing was solely responsible for patients’ skin care,” says Moseley. As a result of the increased awareness, Respiratory Therapy ordered new gel masks and ear protectors and Physical and Occupational Therapy received education on the various types of seat cushions and wheelchairs available. Hospital dietitians are also working to communicate nutritional deficits and educate patients and their caregivers about prevention. The Team has also had a ripple effect in creating awareness throughout the hospital. “Now, there’s more communication between teams,” says Walker.

Another positive outcome is the recog-nition their work has received. Moseley and Walker gave a presentation through a nationally broadcasted webinar, received poster awards related to evidence-based practice, and presented at the Maryland Nurses Association annual convention in Annapolis. In addition, their work is being highlighted in the revised edition of Johns Hopkins Nursing Evidence-Based Practice Model and Guidelines.

Despite these accolades, the two wound/ostomy nurses are most proud of what Moseley describes as “weaving an awareness of patient safety and skin care throughout our culture.” Feedback about the new mattresses has also been gratifying. As one patient told her, “This is the most comfortable hospital bed I’ve ever been in. Do you have it in queen size?”