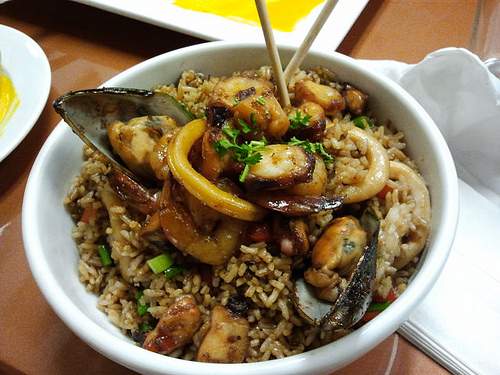 Less than 5 minutes in Miami and my mom is already talking about feeding me. No complaints, as long as it’s on her dime haha.  I’m home… my stomach is the last thing on my mind (palm trees and Eric’s arm around me are distraction enough).

Until the food came out. My lovely family chose to take me to a Peruvian restaurant, Cholo’s. We all have very different tastes, so everyone ordered different things. And despite the large portions, the food was very flavorful (something Cheesecake Factory needs to learn, a big portion isn’t everything!) and genuine to the Peruvian culture. Here’s our beautiful grand dinner:

First, an appetizer to share (or for me, my greedy dinner all for myself). Underneath the freshly sliced pile of onions are chunks of some sort of delicious white fish all cooked in a lime sauce. Ceviche is typically served as an appetizer for a meal but the portion they had at the restaurant was also served with Peruvian corn (the large pale kernels on the left), a boiled sweet potato, and roasted corn. Note, whenever you can get the chance, try some Peruvian corn, it’s starchy and sweet, and unlike any corn typically served in restaurants.

Eric ordered the Lomo Saltado. A marinated skirt steak sauteed with parsley, onion, tomato, and red bell pepper. Served with two sides, french fries and rice. Typically the french fries are actually cooked into the dish with the steak but it’s usually served in restaurants on the side. I strongly suggest if you ever order this, to mix the fries into the steak dish. This was one of my favorite dishes growing up, it’s comfort food.

My mom ordered the Chaufa de Mariscos. This is Peruvian styled-Chinese fried rice. Many Peruvian dishes have some Asian influence in them, and this was especially delicious. I “helped” out my mom with this since they gave a lot of rice. This is a great dish for anyone who is trying out Peruvian food for the first time. The rice is tasty but very distinctly different from the soy sauce and pork flavored rice you usually get in Chinese restaurants.

Daddy Chalco ordered what I thought was Lo Mein at first. He then explained that this dish is called “Chifa” and is Peruvian-Chinese style Lo Mein. Ha, at least I wasn’t so far off! I didn’t get a chance to nibble at this, but next time this is definitely what I’ll order. His food was served with chopsticks and he was such a good sport about it, dutifully eating and slurping the noodles.

In addition to these dishes, other entrees include Parihuela, a tomato based seafood soup that is great come winter. A rather newly seen appetizer is Tiraditos, which is a blend of Japanese and Peruvian style cooking. You can find it at some trendy fusion places (i.e. Sushi Samba). It’s raw thinly sliced fish coated in ceviche sauce or Papa a la Huancaina sauce. What’s the latter? Oh, only the best, most indulgent appetizer… Boiled potatoes drenched in a spicy cheese sauce served cold with plenty of extra sauce on a bed of lettuce. Honestly, the lettuce served one purpose: to make you think you’re eating a salad.

I’m not sure if Baltimore has any legit Peruvian restaurants, but if you ever stumble upon that either there or in your hometown, hopefully this mini guide helps! Buen provecho!