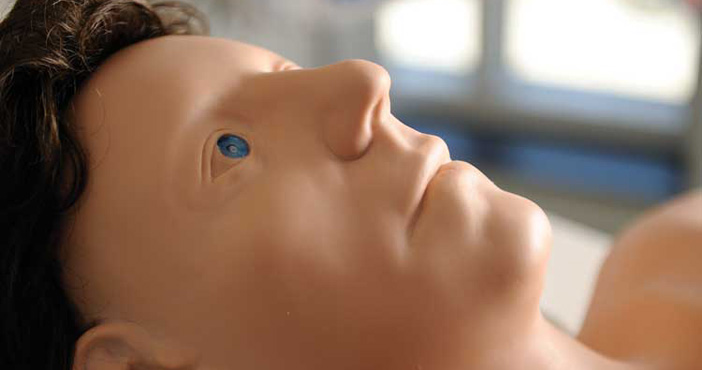 Photos by Will Kirk

For a patient lying in a hospital bed missing half his torso, Harvey is looking pretty good.

That is, until nurse Diane Aschenbrenner decides to give Harvey a heart attack. And then a heart murmur. And then a wallop of cardiomyopathy. Now it’s clear to anyone with a stethoscope and a good ear that Harvey is a mess.

Aschenbrenner isn’t a sadist or an incompetent nurse (far from it), nor is Harvey in any danger at all. For Aschenbrenner, MS, RN, is the Director of the rapidly expanding Simulation Lab at the Johns Hopkins School of Nursing, and Harvey is her latest mechanical marvel, a $60,000 teaching tool that, at a touch of computer console input, can mimic the sounds of 30 cardiac disease states. “The heart sounds are really advanced, and really very, very true to life,” says Aschenbrenner, the appreciation and excitement in her voice impossible to miss.

According to the National Council of State Boards of Nursing (NCSBN), a whopping 87 percent of nursing schools are using so-called high-fidelity mannequins known by names such as Harvey, Sim Man, Vital Sim, Sim Baby, and more. These schools, in aggregate, are spending millions of dollars in resources and faculty time revamping curricula to bring various levels of simulation—defined as a clinical activity or scenario that’s representing clinical practice—to their tech-thirsty students. All with very little evidence that simulation actually produces better nurses.

So what’s going on here? And why are normally conservative research-driven administrations and nursing faculty so willing to ‘go with their gut’ and embrace the unproven?

We put the question to nearly a dozen top nursing simulation educators across the nation; what we found were several key pressures and needs that simulation appears to address, everything from the exploding number of students being accepted to nursing schools to the very real belief that it won’t be long before nurses—as with physicians now—will be required to show clinical proficiency in simulations to retain their licenses. And in the background, rapidly gearing up, is the largest simulation study in history, a 10-school collaboration (including Johns Hopkins) that aims to show whether all this effort is yielding positive results.

Simulation, in its various forms, has been used in healthcare training since the first cadaver found its way to an examination table and the first orange got punctured with a needle. And since the 1960s nursing schools have used ‘standardized patients’ (i.e., actors) to take part in assessments, and ‘low fidelity’ (non-electronic) mannequins and devices to teach simple skills such as taking blood pressure and performing CPR.

What’s changed in the last 10 years is a combination of superior mannequin engineering and computer programming that can be designed and written by relative novices. The results are teaching scenarios in mock hospital rooms that nursing students, sweat dripping from their foreheads, admit to being frighteningly real.

This tantalizing new approach, which appeals to what research shows are nursing students’ natural bent toward kinesthetic (i.e., ‘learning by doing’) education, has combined with administration, financial, and staffing concerns to push nursing schools to see simulation as not just an adjunct to teaching, but an experiential learning tool perhaps as valuable as the traditional gold standard of nursing education: clinical time spent with patients in the hospital.

Hila Richardson, Associate Dean for NYU’s College of Nursing, has committed to replacing 50% of her undergraduates’ clinical hospital time with simulation—more than any other school on the east coast. While Richardson has faith in the technology—she notes, as do many advocates, that high-fidelity simulation has long been researched and relied upon as a training staple in high-risk fields such as aviation and aeronautics—she has some very practical reasons for adopting simulation. Since 2007 NYU’s nursing class has doubled in size, to 800 students. “We’re confronted, like most schools are, with finding high-quality clinical (hospital) sites and high-quality clinical faculty to teach this increasing enrollment,” says Richardson. “The current faculty is aging out and is thinking of retiring. There’s a nursing faculty shortage.”

By moving to a half-sims curriculum, Richardson was able to go from a 1:5.3 ratio of faculty to students to 1:8. Her fervent hope is that the ability of high-fidelity sims to teach many students at once (in addition to the student team at the bedside participating in the simulation, a video hookup can allow an entire class to observe and critique their actions) will offset their time away from the clinic, where students often spend a lot of idle time waiting for their nurse preceptor to give them one-on-one attention. “We invested a lot (in training faculty) to ensure our simulation program would be high-quality,” says Richardson. “It was risky, but we were really at the point where it was a patient-safety issue, a quality-of-education issue, and we knew we had to do something. We knew this had the potential.”

Other educators see the pressure point being the students themselves, and the world they can expect to encounter when they graduate. “Potential employers need students who are ready to hit the floor running. What’s happening now is they’re using simulation for evaluating job candidates,” says Angela Iorianni-Cembak, MSN, RN, Director of U-Penn Nursing’s Simulation Center. “Our students are saying, ‘I’m going for an interview and they’re giving me a simulation.’ But we’ve been doing simulation for a long time here, so our students have already been anxiety-maxed-out in the lab, so to speak. They tell us, ‘You already made me sweat; by the time I got to my interview I was fine.’ So I say, ‘I’ve done my job’ because part of simulation is that visceral response.”

The study’s project director, NCSBN’s Jennifer Hayden, says the study could break a current stalemate in nursing education between schools and state nursing boards. “Nursing regulators are being asked by their schools of nursing, ‘we want to substitute simulation for some of our clinical hours. Can we, and if we can, how much will you let us do?’ And the nursing regulators just don’t have the evidence, with the current literature, to make those kinds of decisions.”

The result is a mishmash of mandates. While state boards such as California, Colorado, and Florida allow up to a 25% substitution of simulation for clinical hours in their nursing schools, “You have other states, for example, Ohio, that say ‘absolutely not! You cannot substitute simulation for clinical (hours),’” says Pamela Jeffries, DNS, RN, one of the country’s foremost simulation experts and a consultant to the NCSBN study.

A professor and associate dean at the School of Nursing, Jeffries has worked on other important simulation studies, such as one discovering that students using the aforementioned Harvey simulator  learned cardiovascular assessment as well as those exposed only to the clinical environment. She says the new study, which calls for teaching essentially identical curricula across the participating schools, should answer the question, “Are we (with increased simulation time) producing a better graduate…are they transitioning to clinical better, quicker, or more efficiently than the control group?”

Until those results come in, many educators will continue to push the sim revolution. Part of the movement is the desire to improve pedagogy.

“People want proof that (simulation) works before they’ll change their ways,” says Suzan Kardon-Edgren, PhD, RN, Assistant Professor at Washington State University and editor-in-chief of the journal Clinical Simulation in Nursing. “My first comeback is, ‘you tell me that what we’re doing now actually works. Does clinical education (alone) actually work?’ We haven’t really looked at it. Dorothy Del Bueno established a competency assessment tool in which the newly graduated nurse watches little vignettes and then critiques them: ‘What is wrong with the person? What is my first nursing action? Is this emergent or do I have some time to wait?’ What we know from her assessment tool is that from the eighties until now, nothing has changed. Fifty-five percent of all graduates—and sometimes more, depending upon the year—who take this assessment fail. Which is kind of damning for clinical as we’ve always done it. (In the past) there was no alternative.”

Now there is, and the fact that simulations can be used to work on everything from basic skills to tackling nearly every condition nurses are likely to face in their career—that’s a benefit that, for many educators, is too alluring to ignore.

Read more about Harvey the simulator in his blog at www.nursing.jhu.edu/harvey