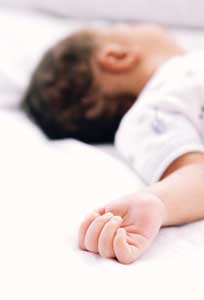 Nurses as Models for Mothers

When babies sleep on their backs, not their tummies, they are at lower risk for sudden infant death syndrome (SIDS). Yet, SIDS still accounts for over 2,500 U.S. deaths each year. Adoption of “back to sleep” has been slow in hospital-based, newborn care and in the behavior of new mothers and families. Why?

Since nurses provide visible, hands-on newborn care that is watched and trusted by new mothers and families, they reasoned that what nurses do can influence parental behaviors. According to Shaefer, “If nurses model putting babies to sleep on their backs, parents will observe and learn to do the same thing.”

She and Terhaar agree that the challenge is promoting nurses to model that critical new behavior. Using a model by the Michigan SIDS program, a four-year demonstration to help nurses embrace this research found a way to do just that. Terhaar notes, “If you want nurses to change how they usually do something, we found it helps to ask them to be a part of the change process itself.”

The demonstration engaged nurses, administrators, and entire facilities in the job of making the practice part of routine infant care. And it worked in seven urban Michigan hospitals. Nurses adopted and practiced safe-sleep techniques that, in turn, were learned by parents and brought home to communities to keep infants safer.