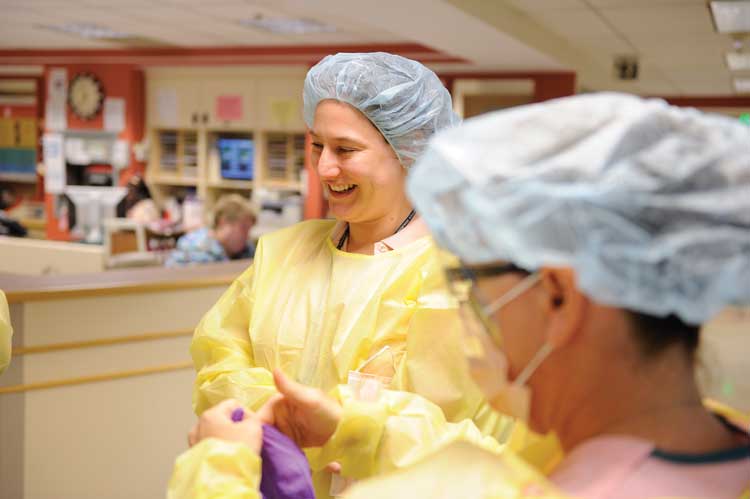 When U.S. Air Force medical personnel sign up for C-STARS specialized trauma training to get ready for deployment, each group represents a wide range of ages and experience. Some are about to embark on their first deployment, while others have many tours under their belts. What they have in common, says Carrie Cox, MSN, RN, and program manager of the Johns Hopkins Burn Center Military Program at Bayview, is that most of them have never spent very long interacting with a burn patient. “Even those who have been deployed,” she points out, “are only treating burn victims in the critical first 24 hours before they’re moved to another facility.”

The program gives the students an opportunity to see “the full spectrum of the healing process,” according to Cox. “It deepens their understanding of that process.” For those trainees with little to no experience with burn care, there is another important dimension to their bedside work with Burn Center staff—increasing their personal comfort level in dealing with severely burned patients. Says Cox, “Often, people are a little scared of or uncomfortable with burn care because the injuries look so bad. If we can get them to feel more at ease in those situations before they deploy, and we usually do, that’s a win.”

The community outreach and education coordinator for the Johns Hopkins Burn Center has never been in the military herself, so she realized that she would have her own learning process when she was asked to take over running the program in 2006. It was only about a year old by then, established formally in 2005 but informally started in 2004 when the leadership of the Burn Center discussed the idea of creating a burn-care component to complement the three-week C-STARS training course provided by the shock trauma unit for U.S. Air Force personnel.

The Air Force Expeditionary Medical Skills Institute’s Center for Sustainment of Trauma and Readiness Skills (C-STARS) is an Air Force training program that works in partnership with civilian trauma-care centers to provide hands-on training for military medical personnel in the types of trauma care they are likely to face during deployment. Over the past decade the program has expanded to three locations—Baltimore, Cincinnati, and St. Louis—and trains a wide variety of service people, from doctors and nurses to physician’s assistants and IDMTs (independent duty medical technicians), who are similar in function to civilian EMTs.

With the expansion of the C-STARS Baltimore program to encompass both shock-trauma and burn-care training, it has become a very popular choice for Air Force personnel preparing for deployment to war zones. Tens of thousands are treated for severe burns in combat regions every year. To date, the Burn Center program has trained over 1,200 students.

Cox manages the program and serves as a bedside trainer in addition to her other duties at Bayview. She creates the schedule for each group of students, numbering 25 to 35 per month, and coordinates the work within the unit. There’s a core group of nursing staff who are very dedicated to the program and devote a lot of time to working with the trainees, although Cox notes that everyone on the unit becomes involved in one way or another.

The first week kicks off the program with a lecture series and certification exam in pre-hospital life-support trauma certification. Cox usually delivers the two-hour lecture about burn care. In the second week the students begin a rotation in the burn unit, spending about four hours over the next two weeks working directly with staff to provide hands-on care in the ICU.

Patients are usually not only happy but eager to allow the students to participate in their care, welcoming the chance to support the military. The rotation provides an opportunity for the students to spend time talking with burn patients in various stages of recovery, conversations that can teach them as much as the certification and hands-on experience.

Conversations are key to the success of the program. Because medical military personnel in a combat zone won’t have access to the state-of-the-art facilities at Bayview, the Burn Center staff must always ask the students what they’ll have available. They’ve become familiar over time with different regions and the types of facilities and medical needs there, but they still make sure they spend plenty of time listening.  C-STARS program directors are regularly invited to give presentations with on-the-ground stories and case studies to keep the Bayview staff up to date, and every course includes time to ask the students questions and learn from them as well. “We’ll ask the front-line guys to describe what they carry in their packs,” says Cox. “A lot of our learning has been very grassroots, very word-of-mouth.”

This past August the program staff received a visit from Col. David B. Powers, DMD, MD, FACS, the current director of C-STARS. He presented them with a certificate of appreciation and a letter of commendation thanking the team for “[assisting] us with providing our armed forces men and women with the best pre-deployment trauma and burn-management training available.” He also awarded Cox a Commander’s Coin, a very rare honor for a civilian. It was her third time receiving this award for her work training armed forces personnel in severe-burn life support.

Cox was moved by the recognition, but feels rewarded every day. She and the Burn Center nurses love knowing that their work serves their country and helps the men and women who defend it. Her hope is that over time they’ll be able to further extend their reach, providing reference libraries and full online courses to train and support more students, ultimately ensuring top-quality burn-management care for greater numbers of war-wounded patients around the world.