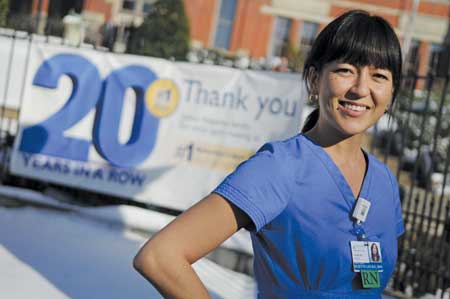 Laurie Bryant’s idea for a volunteer program grew out of a combination of compassion and practicality. Patients in the oncology unit Weinberg 5A required more nursing care than in the past, leaving the staff less therapeutic time with them. Bryant, an RN Nurse Clinician III, noticed an impact on recovery and created a bedside visitation program in response.

She expected it to be popular with retirees, but instead, students in pre-med programs flocked to it. They were required to complete volunteer hours for school, and they wanted bedside experience.  Bryant saw a win-win situation and shaped her original vision into a thriving mentorship opportunity—a success that led to her nomination for The Daily Record’s 2011 Health Care Heroes award in the Nurse category. Bryant was then chosen as the Top Winner in her category, to her surprise and delight.

The Daily Record established the annual Health Care Heroes award in 2003 to recognize excellence and innovation in the healthcare industry and to honor the impact of healthcare professionals on Maryland residents. Nominations are accepted in seven categories from readers, local businesses, and healthcare and community organizations, and winners are honored at an awards ceremony. From hundreds of nominations, six winners are chosen in each category, with one Top Winner named
in each.

In addition to Bryant, three other winners this year came from Hopkins’ nursing ranks. Melva Jones, RN, was a Community Outreach winner for her work with over 3,000 substance abuse patients, whom she helped get started in recovery even when it meant driving them to their programs. In the Volunteer category, Suzette Lee, BS ’09, RN, was honored for multiple journeys to Haiti during the cholera outbreak, including one during the Christmas holiday to relieve other volunteers. Also in the Nurse category, Marlon Caballero, BS ’08, RN, was named a winner for founding a staff Volunteer Committee to encourage volunteer work in the community. After his team raised $8,000 for Habitat for Humanity, they participated in building a house with former President Jimmy Carter.

In the six years that Laurie Bryant has been running her program, she’s had volunteers on the unit three to five days a week for two to four hours a day. Each volunteer tries to spend time with each of the patients on every visit. They’ve also added special events like movie nights, contests to encourage patient motivation, bingo, and even a Peabody student concert with a live video feed for patients who couldn’t leave their rooms. While the volunteers rave about the valuable experience—one current volunteer told Bryant he hopes to come back to work on the unit after finishing school—she speaks modestly about it. “These patients just want a sense of normalcy to their lives,” she says. “It’s nice for them to have an hour or two to think of something besides the stresses on their minds.”