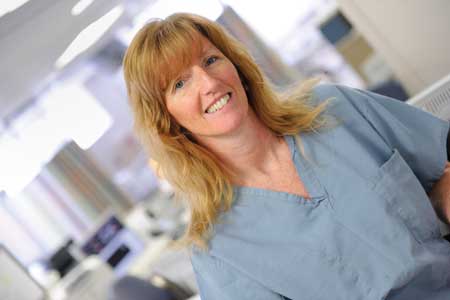 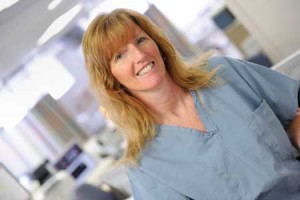 Regina Deible wanted to know why Julie Logan, RN, the organizer of the California Cardiovascular Professionals Conference was asking her for contacts with mentors and colleagues from throughout her career. “She had to give me a heads-up,” she laughs. “Everyone knows I don’t like to be the center of attention.” This time, however, attention would be hard to avoid.

Deible, a nurse in the Cardiac Catheterization Lab at the NIH Heart Center at Suburban Hospital, was unanimously nominated by her peers to receive the John Tworoger Career Achievement Award. Given by the Foundation for Cardiovascular Medicine, it recognizes a cardiovascular professional who has done exceptional work in the field.

Deible is philosophical about the start of her celebrated career. “It was a case of being in the right place at the right time,” she says. A job as a clinical nurse in 1985 at Georgetown University’s Coronary Care Unit started out merely convenient, but became the gateway for her career’s direction. She worked alongside a team she describes as “pioneers” in cardiovascular medicine and followed them to Washington Hospital Center, where she remained from 1991 to until 2006.

“I thought I hated research when I was in school,” she reflects, “but by then, the technological advances were exploding and were clearly changing the field of cardiovascular medicine. It was a very exciting time.  I started in the field when there weren’t any approved devices and had the chance to follow pivotal advancements from the bench to bedside. We had 70 or 80 trials going on at once.” Deible eventually became the Manager of Cardiovascular Clinical Research at Washington.

In 2006, a colleague from Washington Hospital Center convinced Deible to join the staff at Suburban. Now, she splits her time between working bedside in the cath lab and national or international travel as part of a core group delivering lectures and presentations several times a year. Her receipt of the Tworoger award reflects that balance, honoring both the academic passion that has led to over 120 publications, abstracts, and presentations as well as her reputation as a compassionate and caring bedside nurse. Mentor Kenneth Kent, MD, said on the occasion of the award ceremony: “Your incredible smile and instant engagement of colleagues, patients, and other staff remains your strong suit. You connect immediately with people.”

After 25 years in the field, Deible has no plans to rest. When her youngest child is done with school, she anticipates traveling overseas to work with the medical industry in trials for new technology, where she notes that a lot of exciting developments are taking place. She adds, however, that everything about working in cardiovascular medicine is exciting: “Every day in cardiology, there’s a ‘wow’ moment.”