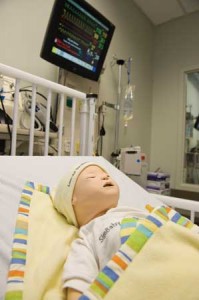 Nine years ago, Jane Webster was in her internist’s office with severe pain, a fever, and diarrhea. Her doctor told her she had a GI bug and sent her home.

But she knew something was wrong. After hearing about her symptoms, her grandmother, crying, told her to go to the hospital. Webster listened.

Webster learned she had colitis caused by an overabundance of clostridium difficile, or c-diff, a bad bacteria in the intestines or colon. Having had a wisdom tooth removed two weeks earlier, she was taking antibiotics, which killed some of her good bacteria—and caused the c-diff to overpopulate.

Webster’s doctors prescribed a different antibiotic for the c-diff. Her symptoms disappeared while she was taking it, and returned when she finished the prescription. She had c-diff four times in three months. “It’s like a weed,” she says.

When she was admitted to The Johns Hopkins Hospital a second time, she met Deb Baker, MSN, RN, ACNP, an alumna of The Johns Hopkins School of Nursing and former President of the Johns Hopkins Nurses’ Alumni Association. “She held my hand when I needed it, and reassured me that everything was going to be alright or she would try to make it alright.”

That’s why Webster has since become a generous donor to the School’s Simulation Lab, a virtual, risk-free environment for nursing students to learn critical-care skills. “Patient safety is very important to me,” she explains. “And this is just one step in the learning process to ensure that.”

For Webster, this is another way to give back to the medical community that, she says, saved her life. “On the rare occasion that I do wake up [during the night], I genuinely take a minute and think about all the people at Johns Hopkins Hospital who give so much in order to save lives 24 hours a day,” she says. “And I’m eternally grateful.”