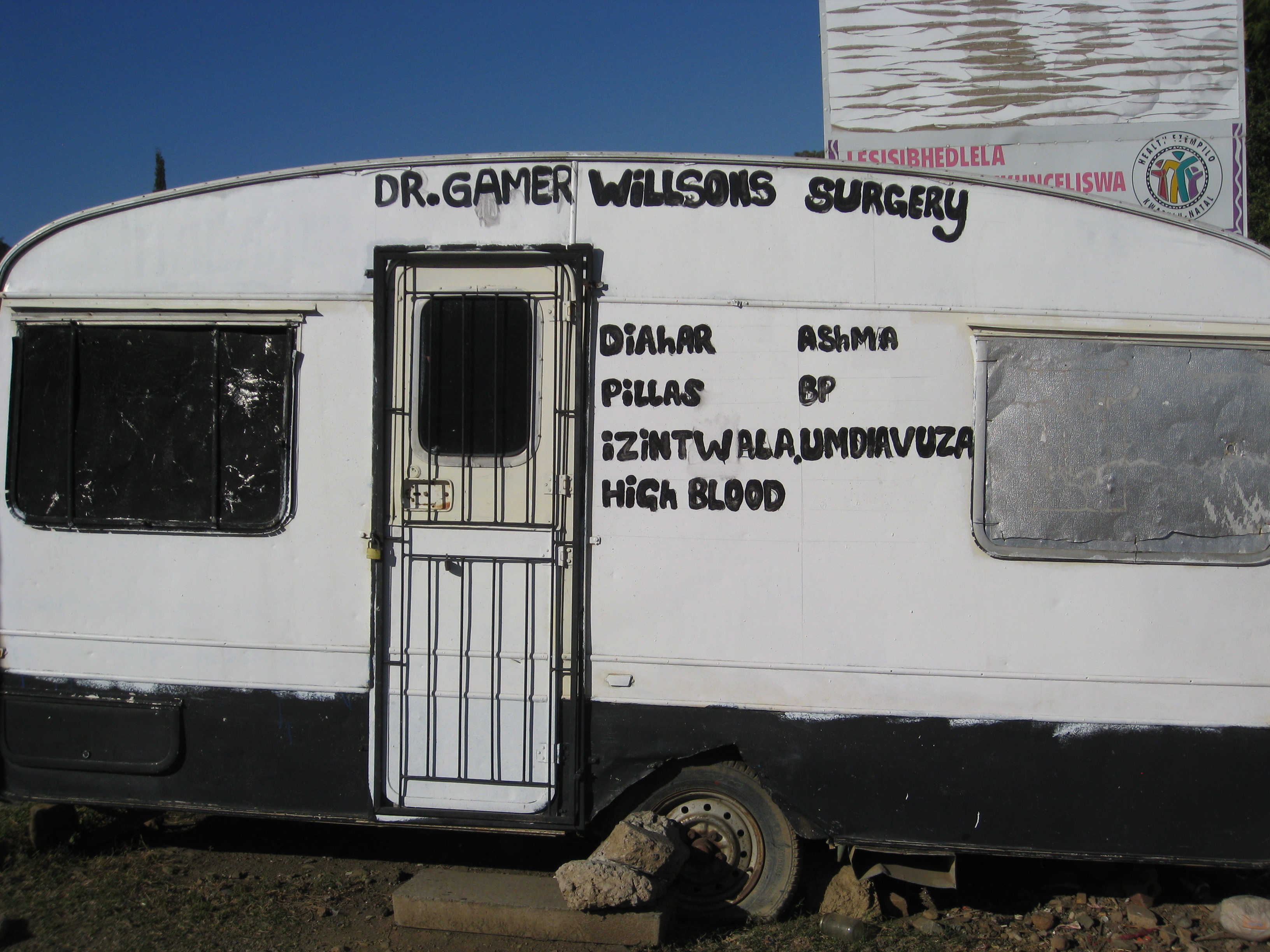 A couple weeks ago, I drove to Tugela Ferry to visit a South African nurse friend/colleague who is working there. Tugela Ferry is a small town/village about a 2 to 3 hour drive inland from Durban – but it is a world away.  As a side note – the first documented major outbreak of extensively drug-resistant (XDR) TB was at the hospital in Tugela Ferry back in 2005 and this area of the province still has very high rates of XDR-TB.  The drive up from Durban is really pretty. It’s amazing how fast the scenery changes – about 2/3 of the way there you go up over a big hill and when you come down the other side everything is different – arid, rocky and much poorer. Just that one hill and you enter a different world. The scenery really reminds me of the US Southwest – mountains, mesas and the dry rocky landscape. Up there (and other parts of the province) the roads are a little scary as you are constantly dodging potholes, goats, cows and people in the road.
Tugela Ferry is not a big town but much to my amazement it has some Chinese shops. I know that the Chinese are invading Africa but I did not expect to see a couple of Chinese families in the middle of nowhere and they didn’t expect to see a white person speaking Chinese. I asked them what they were doing in the middle of nowhere and they looked at me like I was crazy to ask such a question. They did eventually say that they are here because business is a little bit better in this tiny South African town than in China…….I find this very hard to believe. But it is always great to have the chance to practice my Chinese. I am trying to learn a little Zulu while I’m here but I have to say it is more complicated than Chinese. So far I’ve only really learned how to say “hello” and “how are you” and to respond when I am asked how I am. I need to learn more!

Two weeks ago I moved to Pietermaritzburg (the provincial capital), about an hour from Durban, to finally start data collection. It’s hard to believe that I’m actually here and actually collecting data. This has been over a year in the making now and it feels good to finally have data in my hands! It’s been a long road to get here between approvals and the search for funding, but the obstacles and the wait have only strengthened my resolve and desire to do this study.

I started my site visits and data collection last week and finished my first site this week. So far things have been going well and I’ve been learning a lot as I go. The first site is a MDR-TB hospital only. In South Africa, drug-resistant TB patients often spend about 4 to 6 months in the hospital for treatment and to protect the community. The need to protect the health of the public over the well-being of the individual is difficult to see in action. There is one patient with XDR-TB in the hospital and there are no isolation rooms so the patient is in a ward with other patients but is “isolated” at one end of the open ward away from other patients. While there is the need to protect the larger community from the risk of XDR-TB (which has a very low cure rate) – it is difficult to see the consequences of this on an individual. The psychosocial needs of so many patients are often overlooked. This poor patient must feel shunned and outcast…..really heartbreaking.

This week I attended the groundbreaking ceremony of the new KwaZulu-Natal Research Institute for Tuberculosis and HIV (K-RITH) in Duban. K-RITH is a collaboration between the Howard Hughes Medical Institute and the University of KwaZulu-Natal. K-RITH also sponsored a two day symposium following the groundbreaking which was really interesting and I’m very glad that I had the opportunity to attend. Many renowned TB experts and researchers from all over the world were there to discuss some new research findings on various aspects of TB, diagnostics and new TB drugs and drug regimens. I won’t lie, at times I did not feel worthy to be in the same room with some of these people. Two Hopkins School of Medicine researchers were among the presenters – Dr Bill Bishai who has just moved to Durban as the Director of K-RITH and Dr Jacques Grosset, a TB drug expert. I sometimes feel that the more I learn about TB, the less I understand.
Tomorrow I will move to Port Shepstone about an hour south of Durban on the coast to start data collection at my second site. This will be my largest site and two years ago when I visited the hospital it was reported that 30 hospital staff/healthcare workers had developed active TB in the previous year. I will be in Port Shepstone for 2 weeks before moving up to Kosi Bay (near the Mozambique border). I am looking forward to some warmer weather. Pietermaritzburg is very cold at night – the lows have been in the 30s and there is no indoor heat. During the day it gets to the upper 60s – low 70s and in the sun it feels great, but being winter the days are unfortunately short and the cold nights are long. It should be a little warmer at night along the coast. Can’t wait!