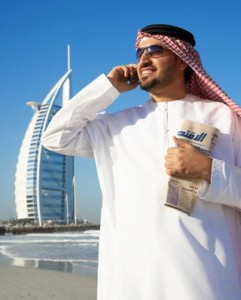 About a week ago I arrived in Abu Dhabi, stepped out of the airport into…a sauna. My first day here, the temperature was 45 degrees Celsius. I only know that’s hot because I learned that 37 degrees C is normal body temperature. (For those not fluent in Celsius, it’s 113 degrees Fahrenheit!) Some days the heat and humidity are oppressive, but life continues to buzz onward.

Despite the heat, there is much going on outside. The city is full of buildings and construction. Everything seems to be under construction. Every other block you will find a mosque. There are more malls than one could imagine, and mostly they are used as a means to escape the heat. But what has struck me the most here is gender.

Traditional Emirati men wear a kandoora, also known as a dishdasha with a head scarf. The scarf is topped by a black rope, that was traditionally used to tether the legs of your camel.

Emirati women wear a black abaya (dress) and sheila (headscarf). These can range from simple to intricate, but ultimately, in most cases, it is the woman’s choice to wear this.
Hamid, a graciously kind museum guide and true historian-at-heart explained the origins of the traditional dress. The original kandoora was a beige color, to blend with the sand, while the woman’s abaya was, and remains, black. Because resources in the desert are scarce, tribes would often fight for goods or access to water. If the men blended into the desert, they were not easily spotted and attacked. What about the women, you say? Women are respected and not attacked, thus wearing black makes them easily spotted and thus avoided.

Women and men are also separated. Women get the seats at the front of the bus, their own metro car in Dubai, and right of way on the sidewalk lest we brush against them. There is so much respect for women in this country that, while I am stared at quite a bit for being a blonde, white woman, not a single man has approached me. It is quite a switch from what I’m used to traveling in Africa and Asia, where everyone wants to meet you and speak with you if you are a foreigner. In some ways, it can feel a bit lonely in a country so full of men, so I am looking forward to diving into work at the women’s hospital, where I will surely meet many amazing women and have many more stories to tell…