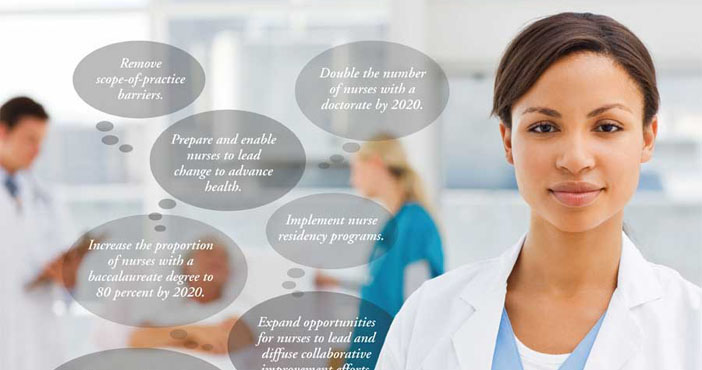 Nursing in America is changing. Bigtime. While the healthcare industry is simultaneously coping with the aging-patient “silver tsunami,” increasingly complex insurance procedures and loopholes, and implementation of healthcare reform, one thing is clear: healthcare is facing unprecedented challenges, and nurses must play a major role in meeting them.

In a new report, The Future of Nursing: Leading Change, Advancing Health, the Institute of Medicine and the Robert Wood Johnson Foundation examine what it’s going to take – from nurses, hospitals, administrators, government, and other members of the healthcare team – to satisfy future demands for care. Chaired by Donna Shalala, the former Secretary of the U.S. Department of Health and Human Services (see page 3), the report committee offers specific recommendations for the future of the nursing profession.

At Johns Hopkins, Dean Martha N. Hill, PhD, RN, thought “it would be valuable to look at the report recommendations and ask: How do we measure up? What is special about academic health centers in general and about Hopkins in particular? And, what might we do as a step forward?” She invited an interdisciplinary group of university and hospital leaders to do just that.

The report’s recommendations center around four themes: improving and increasing nursing education, supporting nurses in practicing to the fullest extent of their education and training, creating a culture and systems in which nurses act as full partners with other healthcare professionals, and collecting better nursing workforce data.

The Future of Nursing recommendations are “not surprising,” said Steven Wartman, MD, PhD, a Hopkins alumnus and President and CEO of the Association of Academic Health Centers. In a boardroom full of Hopkins VIPs, Wartman’s voice brought a wider perspective to the conversation. “What concerns me is the bigger picture or the context in which these recommendations might or might not be implemented on a national scale.”

Take, for example, the suggestion to increase the proportion of nurses with a baccalaureate degree to 80 percent by 2020. Today, only 50 percent of U.S. nurses meet this criterion. And while it may make sense to increase nurses’ education, says Wartman, “nursing has been described as a fractured profession. If that is still true, the fracture, the fault line, is between the two-year programs and the baccalaureate programs.” In this light, he wondered whether this educational goal is attainable.

Karen Haller, PhD, RN, believes it is – and that the nursing profession is divided no longer. “We’ve well earned our reputation as a fragmented profession, but I don’t want the myth to outlive the reality,” pointed out Haller, who serves as Vice President of Nursing and Patient Care Services at Johns Hopkins Hospital.

“One of the appendices in this report is the consensus model, a model about licensure, accreditation, certification, and education requirements. All of the nursing organizations have signed on to it in addition to the 50 state boards of nursing,” she noted. The support of baccalaureate-level education, she said, is unanimous.

So how does Hopkins measure up? At the Hospital, “we’re at 78 percent of nurses with a bachelor’s,” said Haller. “I’ve got to step that up two percentage points over the next few years here.”

And at the School of Nursing, “the vast majority of our students, more than 80 percent, already have a college degree when they come to us,” added Hill.

The report also recommends doubling the number of nurses with a doctorate degree by 2020 and ensuring that nurses engage in lifelong learning through continuing education and training.

Increased education will only be useful, however, if nurses can fully use their knowledge to improve practice. But nurses often confront government regulations and institutional policies that prohibit them from performing at the top of their ability.

Wartman pointed out that, “dealing with a complex regulatory environment at a time when states’ rights are becoming very powerful and very important presents a serious challenge. How do you transition to a more national framework?”

As we look toward the future, the need for consistent advanced practice nursing laws will be even greater. Hill noted that “as increasing numbers of people have insurance or require primary care, we’re going to need more providers who are qualified in skill that can lead it in practice.”

But not everyone agrees that advanced practice nurses should step up to the role of primary-care providers. Edward Miller, MD, Dean of the School of Medicine, said that the report’s recommendations, taken “to the ultimate,” would be for nurses to conduct independent practice. He asked, “Is that way the right way to go? I’m more partial to the team concept. I think the recommendations go a little too far, to tell you the truth.”

His concern echoes that of other physicians, some of whom wrote to the editor of the New England Journal of Medicine in December. They emphasized that nurses are not interchangeable with physicians and advocated for keeping the traditional, physician-led healthcare team.

Deborah Trautman, PhD, RN, Executive Director of the Johns Hopkins Center for Health Policy, spoke to the issue of whether nurses want to step into leadership roles. “Leadership doesn’t mean they step away from the bedside, necessarily, but in some nurses’ minds that’s what they think. But having nurses continue to do what we support at Hopkins – be involved and participate beyond traditional boundaries – serves not only nursing well but serves some of our other areas equally as well.”

“The advanced practice nurse needs to have more recognition in the Hopkins Health System,” offered Margaret Garrett, Senior Counsel and Director of Risk Management for the Johns Hopkins Health System. “In community positions, we’re getting advanced practice nurses to do more of the primary care, which is excellent because we need that particular level.”

The recommendation to remove scope-of-practice barriers doesnÕt just apply to advanced practice nurses, pointed out Haller. The idea is to allow all nurses, and all levels, to perform to the fullest extent of their training. This would enable nurses to maximize their value to the healthcare teamÑand it can even help lower the cost of healthcare overall.

“The notion I find very attractive in this report is putting the work at the lowest-paid level that is trained to handle it. This means having our aides or our technicians doing certain work rather than our RNs. The report would take that idea all the way up, through every level of healthcare, including advanced practicenurses and our physicians,” said Haller.

Ronald R. Peterson, President of the Johns Hopkins Health System, noted that, “In most compensation models, as long as someone is qualified to do the job, people who are doing the same job should be compensated equally. But if we go the next step of saying that a baccalaureate-trained nurse should be differentiated in terms of scope of work versus someone who has AA, then we have a basis in my opinion for differentiating in terms of compensation.” Hopkins currently gives baccalaureate-prepared RNs more tasks, responsibilities, and compensation at the top tiers of the clinical ladder.

“We need to deliver our services in the most cost-effective way. We have to figure out a way to pay attention to the total cost given the rendering the services,” Peterson added.

Working with Our Colleagues

These kinds of changes – that reach across disciplines and affect the entire healthcare teamÑrequire an enormous amount of respect, collaboration, and communication. The challenge, Wartman pointed out, is that “all the health professions practice within the framework of a guild, and this mentality to a large extent prohibits these kinds of changes that we’d like to see happen. Maybe there are steps within the Hopkins environment that can be taken to reduce that.”

According to Hill, Hopkins is well on the path. “The guild is gone in research. It has become very collegial, very collaborative. I think faculty move that way because they understand that’s going to be the best science,” she said.

The question is how to move that interdisciplinary environment out of the research lab and into the hospital and the classroom. One major obstacle? “We have three schools [nursing, medicine, and public health] with three calendars,” said Hill. Planning interdisciplinary lectures, joint classes, or multi-school student organizations while on different schedules “presents a huge problem and weÕve got challenges there.”

“I think we work pretty well together between the schools of public health and nursing,” added Jim Yager, PhD, Senior Associate Dean for Academic Affairs at the Bloomberg School of Public Health. “But perhaps we could have a bit more sharing of some best practices. But our different academic calendars do create difficulties. I don’t know if Hopkins will ever address that issue. I mean, for us to change our calendar would be revolutionary, but not necessarily bad.”

“I think if we want to do some real good, we need a single schedule among the three schools. That would knock down a couple of barriers,” agreed Miller, speaking for the School of Medicine.

“This is a sword that no one’s been willing to fall on. And who has the authority to make it different?” asked Hill. The group paused, imagining the possibilities.

“Generally, what’s remarkable about this place is when you get people to come together, anything can happen,” said Hill.  “These walls are extremely permeable.”