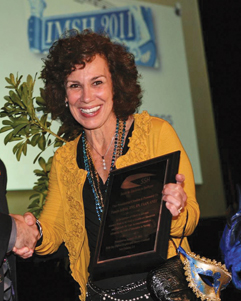 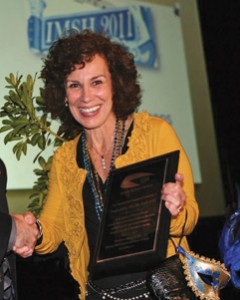 Pamela Jeffries, Associate Dean for Academic Affairs, has been recognized for her role in developing and advancing the field of simulation in nursing with a Presidential Citation from the International Society for Simulation in Healthcare (SSH).

“Pam has made an enormous contribution to the educational foundation, the science, and the momentum behind simulation,” says Dr. Michael Seropian, President of SSH, who presented the award at the society’s annual meeting in New Orleans in January. “She has really had a substantive impact on simulation across disciplines. It’s a well-deserved award.”

Only eight presidential citations have been awarded in the history of the society. With more than a decade of teaching, research, publications, and advocacy for simulation, Jeffries, DNS, RN, has proven herself a leader in the field. “I want to be one of today’s nurses who revolutionize tomorrow’s nursing education,” she says.