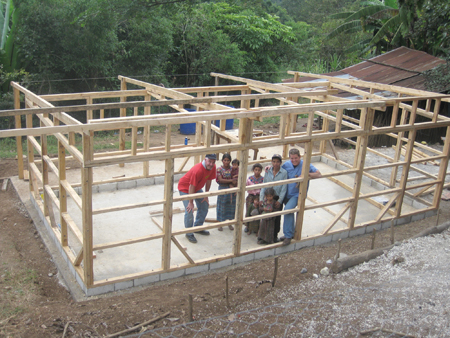 Guatemala Esperanza was born, as so many ideas are, out of a spontaneous moment in a casual conversation. Radiation oncology nurse Ron Noecker, RN, who had lived in Guatemala for a time, returned in March 2010 from one of his regular trips and mentioned to Marian Richardson his desire to return and help with the ongoing work in impoverished areas.

“So let’s go,” replied Richardson, RN, a nurse manager in Radiation Oncology. Just seven months later, a team of thirteen Johns Hopkins oncology nurses and radiation therapists were en route to the tiny mountain village of Pacoj. There they would spend two days working alongside the residents and the team’s partners from Hombres y Mujeres en Accion to build much-needed homes.

To join the trip, participants had to pay their own travel expenses and help with fundraising efforts. The group’s goal was to raise $4,400 to build two homes in the region; thanks to a matching gift from Chairman of the Board of Johns Hopkins Medicine C. Michael Armstrong, they raised enough to build four.

Suzanne Cowperthwaite, MSN, RN, NEA-BC, Assistant Director of Nursing at the Sidney Kimmel Comprehensive Cancer Center and one of the first to sign up, notes that the bulk of Guatemala Esperanza’s work happened before they ever boarded a plane. The team raised money and collected items like socks, vitamins, and school supplies from Hombres y Mujeres’ wish list. Every member of the team limited their own belongings to carry-on and used their 50-pound luggage allowance to bring as many donated supplies as they could fit. Team member Andrea Cox’s mother rallied her quilting group to make baby quilts to send along.

Although the focus of the team’s work was not medical, the construction of new homes improves health in the village. Existing housing often lacks ventilation, has poor flooring or none at all, and leaks when it rains, making illness and health issues worse.

“In our work, we often get isolated in academics,” says Marian, who coordinated the project with Ron. “This seemed like a great opportunity to get out into the world and do something concrete.”

Ron recalls that his family and friends used to react to his trips to Guatemala as if he were going to the other side of the world. “But it’s not that far away. We’re just going to help out our neighbors.”

For more information about the Guatemala Esperanza project, visit www.guatemalaesperanza.org.