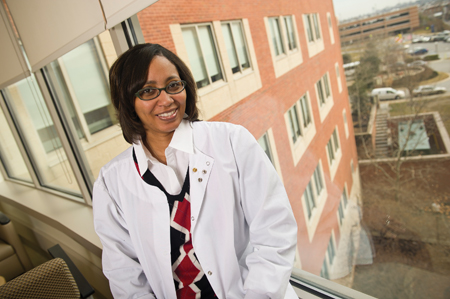 Bayview Nurses are Going for Advanced Degrees
by Rich Shea

Growing up in Gary, Indiana, the daughter of a steel-mill worker and a stay-at-home mom, Rona Corral knew she’d eventually be a nurse. She candy-striped in high school, and through a mentorship program she teamed up with an RN to prepare for enrollment in Purdue University’s BS track, which, after her graduation in 2000, landed her a job in a Gary community hospital. But after a year, she recalls, “I wanted to see someplace else.”

Next stop: Johns Hopkins Bayview Medical Center, where, before signing an 18-month contract, she told her future supervisor that she planned to continue her nursing education at Johns Hopkins. And indeed, over the next decade, she rose through the ranks while earning an MSN, getting married, and having two children. She’s now Patient Care Manager in the hospital’s Bridgeview acute medicine unit. “And it’s because Bayview encourages and enables you to get advanced degrees,” she explains.

At Bayview, where more than 50 nurses have attained a bachelor’s, master’s, or doctorate in the past five years, there is a “culture of education,” according to Mary Ann Greene, Director of Nurse Education and Practice. “There are things taught in BS programs alone that are critical to our profession—research, implementing evidence-based practices,” says Greene, DNP, RN, NEA-BC. “These are not taught in the lower-degree levels. Leadership skills, community-health nursing—those cannot be taught because of the constraints of a two-year program.”

Corral, who worked her way from RN to CNS to manager, and aspires to a vice-presidency, is a case in point. But she’s just one of more than 1,000 nurses Bayview can accommodate with a host of degree-attaining opportunities.

Another is Susan Wallace. Baltimore-born and raised, she too dreamed of being a nurse early on. But homesickness in college brought her back to the region, where for 10 years she worked as a secretary in a steel mill. Sensing that job wouldn’t last, she got an associate’s degree in nursing, then spent 20 years working in Bayview’s NICU, which, she says, was “a perfect fit.”

In her fifties, however, Wallace knew that the job’s physical demands would eventually be too much. Plus, she’d begun to teach, another job she enjoyed, and wanted to earn the bachelor’s degree she’d never attained. So she enrolled in the University of Maryland, where in five years she got her BS, MSN and—spurred by Greene, her supervisor—post-graduate certificates in nursing leadership and education. She’s now a professional-development specialist at Bayview.

What Corral and Wallace have in common is the means by which they got their degrees while working full-time: a combination of the hospital’s $5,000 stipend for any employee pursuing a nursing degree and its tuition-forgiveness program, with an application process that includes recommendations and explaining to a selection committee how you intend to use your degree. “Not everyone’s accepted,” says Wallace. “But if you are, every dollar you spend after your $5,000 benefit is exhausted, they’ll reimburse you. The nice thing about that program is that it also covers books, which are extremely expensive.”

Even more valuable than money is time, says Wallace. And with Greene’s help, she was able to flex her hours, working weekends so she could attend weekday classes. Studying for the certificates, she tried yet another route: online courses. Bayview accepts those approved by the American Association of Colleges of Nursing.

As for Corral, the tuition-forgiveness program allowed for one paid day off each week, meaning that she worked two 12-hour shifts and studied during the third. “That was critical,” she says.

A scheduling accommodation is also made for nurses pursuing a BS via the nearby College of Notre Dame. Grouped as a “cohort” for two-and-a-half years, a handful of RNs share the same work schedule and are taught bachelor’s-relevant classes one night a week by Notre Dame instructors in the hospital.

These days, any degree beyond an associate’s is almost necessary. “Nursing is a learning profession,” Greene explains, “and with each degree, more doors open—and more varieties of doors.” Nursing schools, where faculties’ average age is mid-fifties, for example, are looking to hire a new generation of instructors, according to Greene. “So that’s one way Bayview supports the profession—by growing master’s- and doctoral-prepared staff who can be faculty.”

Better-educated nurses are also safer nurses. When she was a CNS, Corral had to investigate why some blood cultures were turning up contaminated. A review of procedures and evidence-based research resulted in a revamping of hospital policy, starting with hands-on “sterile procedure” training, which Corral conducted with nurses and tech staff. “Evidence shows that collecting blood cultures using this technique decreases the chances of contamination,” says Corral, who credits her master’s training.
“That was the message in every class at Hopkins—look at why we’re doing things, and not just do them because they’ve always been done that way,” she explains. “The question was, ‘How can we improve the practice?’”