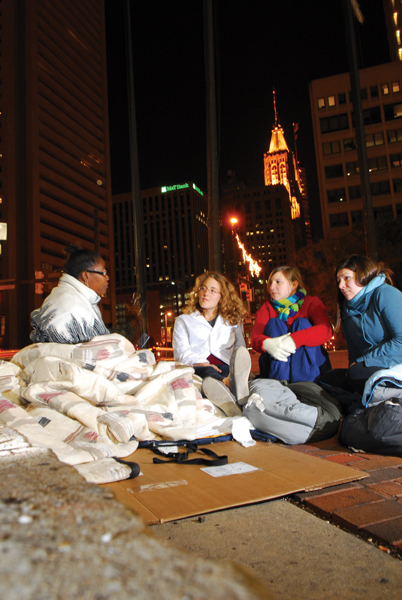 “Sleeping Out” Brings Awareness of Homelessness

On a cold night in November, Hopkins nursing students were sleeping on Baltimore’s city streets.

“We are bringing the reality of homelessness and hunger out in the open,” says Kirsten Blomberg, ’11. She points out that although an estimated 3,419 men, women, and children are homeless in Baltimore on any given night, homelessness “is not something that is obvious to us in our day-to-day lives; it’s hidden.”

Blomberg and 200 others—fellow nursing students, local college students, and homeless people—hit the streets to commemorate National Hunger and Homeless Awareness Week. The event kicked off with a panel discussion and a concert, after which the Hopkins nursing students gave out free blood pressure screenings. They handed out socks and blankets, played cards, and then hunkered down to see what life is like sleeping on the streets.

“It was chilly for sure, but we wore layers and had enough blankets,” says Blomberg.

And what did Baltimore’s homeless citizens think of the event? “It really meant a lot to them,” she says. “I remem-ber waking up in the early morning, maybe around 4:00 a.m. I looked around and saw that a couple of the homeless people were staying up, watching out for us. They just wanted to make sure we were safe throughout the night.”