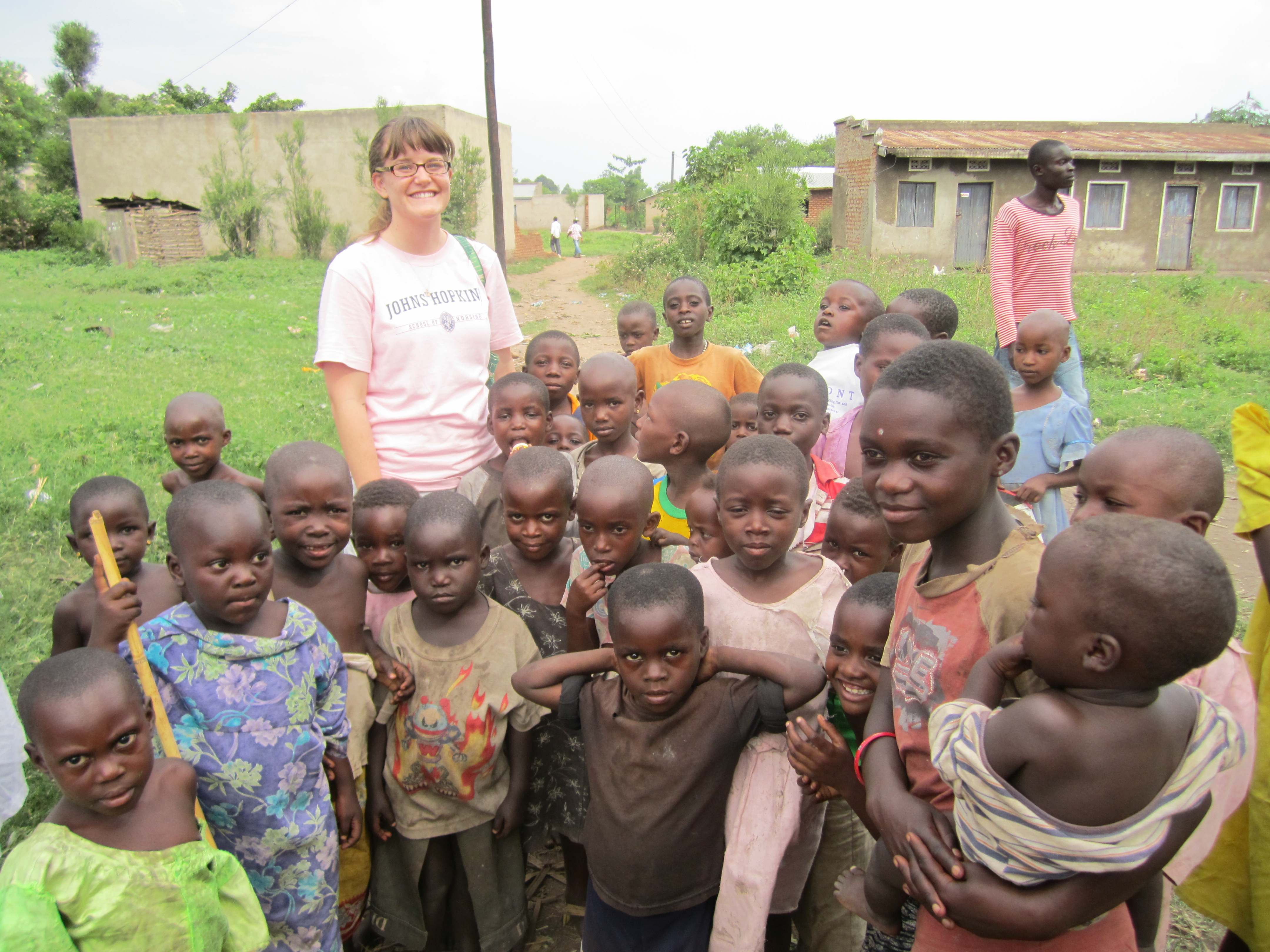 I’ve been in Uganda for almost a week now, and I apologize for not detailing my adventures here earlier. Be prepared, this is going to be a long one.

I arrived at Entebbe Airport at 7ish in the morning, with a beautiful sunrise over Lake Victoria…quite a wonderful way to fly in. The scenery here is beautiful, with rolling hills with red dirt, and the weather is quite nice actually, definitely not as hot as you would typically picture Africa as being. We are at the end of the rainy season.

I am picked up by one of the drivers, they call them “specials,” and was taken to the house where I’ll be staying with the professor, Dr. Sara Groves, who has been here for almost two years. I get my room, meet a few of the other housemates, and indulge in a quick nap. I don’t get to sleep for long, as I get a phone call from Sara at noon requesting me to help her test the nursing students on their clinical skills, and I’m whisked away to the Makerere University Nursing School, where I evaluate the students on giving injections, starting IVs, and doing wound dressing changes. Sara and I walk the mile-ish home, stop by the grocery store and to get some anti-malarial meds, and then I’m off at my new home, relaxing and settling.

This morning I met with Sara, one of the university nursing administrators, and the Registrar of the Council of Nursing and Midwifery for my project. The man wasn’t known by anything but “The Registrar,” and apparently the big deal here is to sign in the visitor books, which makes you feel like you’re at a wedding. Ha. He sounded very delighted about the project, and I thought everything was going well. Later on that afternoon, I come back to the house and do some relaxing. The plan is that I’m going to go to the council the next day and get an “orientation” with the promise of some traditional Ugandan food.

Here’s a picture of the statue in front of the Council:

I wake up early to get to the Council, and walk the whole way there, but unfortunately streets here are not named, no one actually knows where any building is, and I end up getting lost wandering the streets of Kampala. I finally get to the Council, and  I get a short tour, then try to head back to the University, but end up getting driven to the wrong campus, and then walk about two miles to the hospital. Ugh.

One of the highlights of my day (and not in a sarcastic way) is to go see one of the nursing faculty’s new son, who is only a month old and already looks like he’s not a newborn anymore…but rather he’s put on so much weight that he’s in 3-6 month clothing! The house was in the outskirts of Kampala, in a traditional Muslim community, which was an interesting cultural lesson in itself. Once we’re done with the visit (which they kept fairly brief), we headed back home.

After a long day of getting lost TWICE (there goes my directionally challenged self) and not eating since breakfast, the housemates and I end up going out to an excellent Indian restaurant. (Who knew that Uganda has so many good Indian places?) That definitely was the best part of my day, and the company was wonderful.

A relaxing weekend, and I found out that I’m going with Makerere University School of Nursing and School of Veterinary Sciences to the western part of the country…leaving at 6AM. I know it’s to do an intervention directed at rabies, but I’m not sure in what capacity I’ll be helping.

I’m told that today we’re to leave at 6 AM, so I promptly arrive at the meeting spot at 6. Everyone else shows up at 7, and we finally start the six hour bus ride by 8. That’s the extent of punctuality for you here, definitely a difference from the Hopkins world!

We were headed to the western part of the country, in Kasese, to do some work for World Rabies Day on Tuesday. The bus ride was pretty uneventful, with some lovely street food, good company, and beautiful countryside. I heard that Uganda was deemed “the pearl of Africa” by Winston Churchill, and I can definitely see why. I never thought the city was that exceptional, it has some beautiful hills, but also has the downsides that come with major cities. Most of Uganda is rural, and I can see why. The countryside is absolutely breathtaking:

We went to a small village first, and the concept was that fourth year vet and nursing students would immunize dogs and cats against rabies. I honestly had never given an injection to an animal before…so that was quite an adventure, but not to entirely dissimilar to giving a shot to a screaming child.  I didn’t get a chance to do much of that though, the children in the first village were so entranced with the color of my skin, that they surrounded me and kept touching me to see if it felt the same.

After being in Haiti in March, I came into this experience with a particular idea of what I would be exposed to here, especially the extreme levels of poverty. This experience in the village definitely was more than I had originally expected. As a dog owner, I was looking forward to seeing some people’s pets and maybe getting a little dog time in, but these dogs were in horrible condition. There was overwhelming mange and other visible diseases that afflicted these poor animals, with their ribs visible from across the other side of the village. If you kept your animals in that state in the US, you may be arrested for animal cruelty.

So the dogs were bad, but the children were worse. You can’t really see in the picture, but all my nursing assessment skills came in handy when I could determine how many of these children were malnourished, and dressed in tattered clothes. None of the children were enrolled in school. It was, as the Makerere nursing professor put it, a “missed opportunity”.  We didn’t get to implement a lot of teaching about rabies, or general health, but if this happens again next year, they’ll be better prepared and will be able to utilize the nursing skills available with the students present.

That evening I had dinner with the “mother” (or the faculty supervising) of all the students for the trip. She’s a wonderful and strong woman, who recently earned her PhD in nursing. She opened up and detailed how challenging being a woman in academia here in Uganda is, especially with the gender issues of male dominance. As an American woman, who was raised with independence (almost to the point of stubbornness) and the pursuit of education placed at the highest priority, it was hard to imagine how difficult it would be to attain the educational accomplishments that she had. It made me incredibly thankful for the wonderful and supporting husband that I have, who has been nothing but supportive in this entire adventure at Hopkins. This professor detailed about how she feels that education for girls may be one of the most important interventions to improve the overall life of Ugandans.

Today was a busy day, we visited three different villages, and continued with the vaccinations for the animals for the official World Rabies Day. Fortunately enough for my poor heart, the quality of the care that the animals and children received improved with each village we visited. At the final village, the children were all (except maybe a handful) enrolled in school, and the veterinarian overlooking the event gave them a talk in their language. Most everyone here speaks English, but Luganda and other traditional languages are present all over.

Here’s some of the group I worked with:

The ride home felt like the driver from the Knight bus in Harry Potter, with the smoothness of the Indiana Jones theme park ride, and all taking place in the Oklahoma dust bowl…but thankfully only for the last two hours getting into the city. Otherwise the quality of the roads was fairly nice.

They call Uganda the Pearl of Africa, and I can definitely see why. This country is beautiful, the people are warm and welcoming, and the weather is amazing. The food is lacking, as they are fans of anything bland and from the potato family, and I’m dying for some hot sauce. My project is changing each day, and so I’ll update you with the changes as they happen.