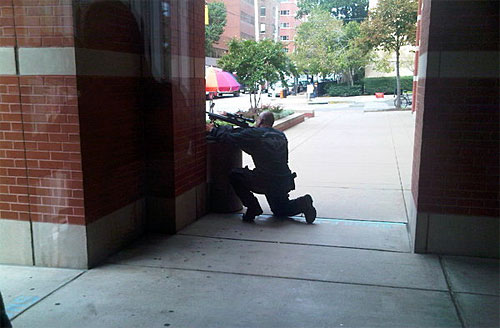 It’s the day after the shootings at the Johns Hopkins Hospital triggered a complex-wide lockdown and made national news, and I’m thinking about security—both in practice and in perception. Yesterday’s dramatic events have already been chronicled widely. My classmates and I were all in lecture when a security text message swept through the Hopkins community advising us of the lockdown. Over the next few hours, we followed the news of the events unfolding across the street from within the safety of the School of Nursing. Some called loved ones to tell them they were safe, while others called friends and coworkers in the hospital to check on them. Once the situation was resolved and the threat had passed, we were all cleared to go home early.

Now, 24 hours later, I’m reflecting on the responses—both actual and emotional—of my classmates and the community.

When we’re at the periphery of an event, the first way we gauge its severity is by the official response. If a single cop shows up, it’s not that bad, right? But if the SWAT teams come in, then it must be huge. There’s undeniable common sense in that logic. But at the same time, it means that some of the biggest responses—which create the most secure environments—can scare us into feeling much less safe than we actually are.

Yesterday, people at the School of Nursing got shaken up. After all, it’s not every day that you get to watch SWAT teams assemble in front of your building. “Welcome to Baltimore,” more than one student said, in mixed tones of anxiety-induced humor and stress. Yet, to walk away from yesterday’s events with an increased feeling of danger is, I think, a mistake.

Talking about it later on the phone with my mother, she compared it to a time in her youth when, during the race riots, the National Guard was stationed at the end of her block. “It was scary, to have men with guns on my street. But it didn’t mean that I was less safe. It was just that I’d never had to be kept safe before.”

The now-ubiquitous photo of a sniper stationed facing the hospital was taken at the main entrance of the nursing school. You don’t get much safer than having a sniper guarding your front steps.

Even more compelling than the physical response of the Baltimore Police and JHU Security, though, was the emotional response of the community itself. As I walked home yesterday afternoon, a dozen people—from the neighbors who knew me to people on the street who simply saw my JHU ID badge—stopped me to ask about the days events. Moms, mechanics, even the Fed-ex delivery guy wanted to know how things were up at Hopkins. “Quite a scare, huh?” one man said to me. “I’m glad that the doctor who got shot is going to be okay.”

“We’ve been praying for all of the staff at Hopkins all day,” another woman told me from her front steps as she joggled a baby on her lap. “What a terrible, crazy thing to happen!”

This show of concern, more than the SWAT teams and the snipers, tells me that yesterday’s shooting and the surrounding events were anything but “just another day in Baltimore.”

What happened yesterday was significant, jarring, thought provoking and tragic. I can only imagine what the men and women on Nelson 8, the floor where the shooting took place, went through, and what they’re still going through as they deal with the emotional aftermath. But this tragedy doesn’t make me feel like I’m in any more danger. If anything, the quick, concerned, and thorough response—and the fact that staff at JHH continued to treat all of their patients during the lockdown—has me more reassured than ever.

“Stay safe, chica!” my neighbor yelled at me from her second floor window this morning as I packed my BP cuff, stethoscope and scrubs into my bike panniers. I have every reason to believe that I will be doing just that.