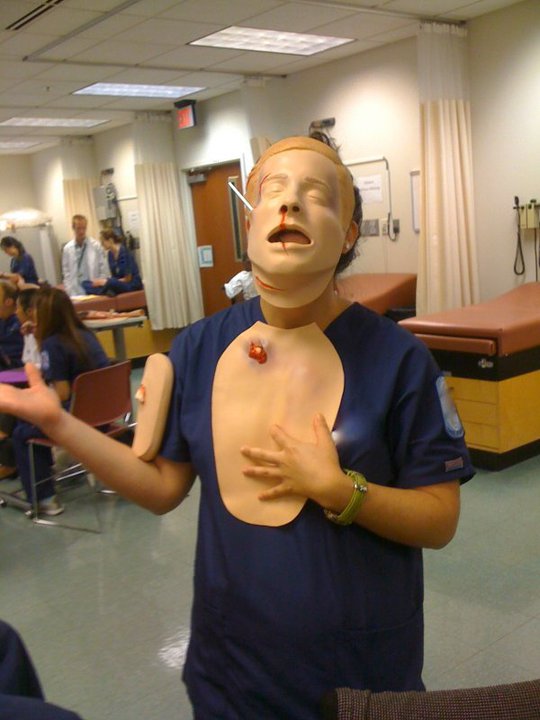 I definitely wouldn’t have expected a day like Thursday to play out like it did when I woke up that morning.  You never actually think an episode of “Grey’s Anatomy” can be anything close to real life (especially since they never put the stethoscopes in correctly on that show).   The SON staff did a great job in carrying out the security measures after we learned that there was a shooter in the hospital across the street, and I definitely felt safe.  In fact, I tried to use the lockdown time to study for a test .  However, classes were cancelled for the rest of the afternoon, so once the situation was over I left as quickly as possible to go home.  I needed to relax and process the day so I could move forward.

It is just so bizarre because the day before, I  had one of my most interesting days so far at school.  In the morning we had a class for four hours where we went to four different instructors to discuss four different topics.  It was great to move around and really made that block of time move quickly.

I was with my clinical group and we started out with our clinical instructor talking about different wounds and describing them.  In the afternoon we had a lab where we learned how to change wound dressings and we all received our sterile gloves and masks that we will keep for the year (some like to refer to these as tools, I like to refer to them as fun toys).  I digress.  I would like to go back to describing wounds.

Before nursing school if I saw a wound, depending on its severity, I would probably describe it as: “disgusting,” “bloody,” “nasty,”  “gross” or “where is the nearest bathroom?”  Who knew there were actually more interesting and scientific ways to describe wounds?!  They definitely don’t teach you these words in elementary school during the adjective lesson.  Take a look at the below picture, for example …

You’re thinking what I’m thinking before nursing school, right??  Or, that you’re glad that that’s not you.  Well, let’s have a little lesson.  Now that I’ve learned how to describe wounds I would like to start with erythema (a more sophisticated way to say red); I would also say puncture wound (this may seem obvious to some, but not all); compound fracture (see that bone sticking out of the arm?); I will also say ecchymosis (we had a long discussion about this, but basically it means blue … from a bruise); there is a laceration on the neck; and on the chest I would say there is a little distension.  Am I missing anything?

So now you’ve learned that instead of a bruise you can tell someone you have a little, “ecchymosis,” and if you’re a little redder than normal you are just a little “erythemic.”   Hope that was useful!