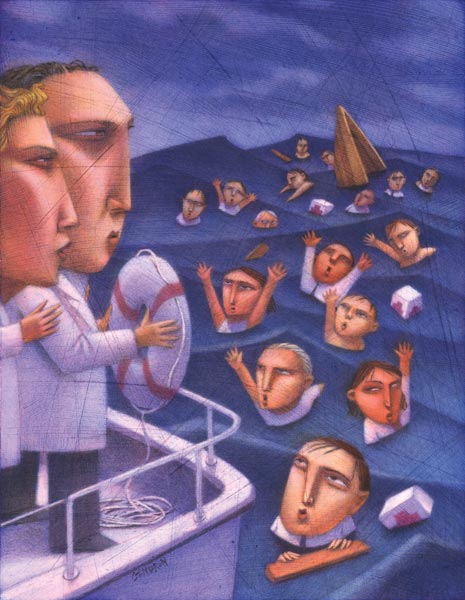 It is January 2015. What do you see as the major health policy challenges still facing the nation?

More than 430 U.S. college students answered this question in the KaiserEDU.org 2010 Student Essay Contest. And one came out on top: Catherine Denver, a Hopkins nursing student in the traditional class of 2010, won first place among the undergraduate student entries.

A Returned Peace Corps Volunteer, Denver has always had an interest in the influences that shape the lives of communities and individuals. After finishing her baccalaureate degree this May, she began working at Johns Hopkins Hospital and will continue studies toward her MSN. She aims to become an advanced practice clinician working in underserved communities.

Following are excerpts from her full essay.

By 2015 universal healthcare will be in effect in the United States, mitigating many of the health issues seen in the first decade of this century. However, two major issues will remain: a severe shortage of primary care physicians (PCPs); and an obesity epidemic. Both threaten the well-being of our country, now and far into the future…

As our nation faces more and more chronic illness, most commonly heart disease, diabetes and cancer we find ourselves armed with specialists who are excellent for our tertiary care needs but ineffective for the prevention or long-term management of the chronic illness. PCPs, long seen as the “gatekeepers” to the health system, are in increasingly short supply. We must address this shortage before we see the consequences: increased mortality, morbidity and lower quality of life and longer waiting times for preventive care appointments. We must make it feasible and attractive for medical students to become PCPs. The gap between primary and specialty practitioners’ salaries must be reduced.

To do this, reimbursement for primary care services must increase to reflect the value of the service being provided. It is irresponsible to put the burden of primary care for millions of people on overworked and underpaid PCPs. Legislation that guarantees debt repayment for new PCPs as well as higher salaries is crucial. We must expand programs like the National Health Service Corps, providing debt relief for new medical school graduates so that they see primary care as a feasible career choice.

Our nation’s obesity epidemic is resulting in significantly increased rates of morbidity and mortality as well as in cost to our nation ($92.6 billion in 2002 dollars). There are currently many programs aimed at combating obesity including bans on trans-fat, prohibitions on unhealthy food at schools and nutrition label requirements in restaurants and on packaged foods. However none of these target the source of widely available, nutrient-deficient foods. If we really want people to eat well we have to make it easier to do so while at the same time making it more difficult to eat unhealthy foods. The relative low cost and convenience of energy-dense foods has been cited as a main contributor to overweight status, particularly in those of low socio-economic status…

As long as we are promoting agricultural policies that incentivize farmers to grow mass quantities of corn, soy and wheat we will have an endless supply of cheap, unhealthy foods. America’s poor, no matter how great our obesity prevention and reduction programs, will continue to be faced with the reality that eating healthfully in this country is out of their price range and it is far easier to find and afford sweet, fattening foods…

Our nation’s PCP shortage and obesity epidemic are two major problems that will not be resolved through policy change alone. However, if we make it a priority to compensate PCPs fairly and reduce medical students’ debt we will be on the right track towards bolstering the number of PCPs in this country and improving health outcomes as a result. Similarly, policy change will not necessarily lower the obesity prevalence in this country but it will help to remove one of the major barriers to healthful eating: cost and accessibility. With such policy reform our current culture of eating will begin to change and interventions focusing on behavior and environmental change can take effect.