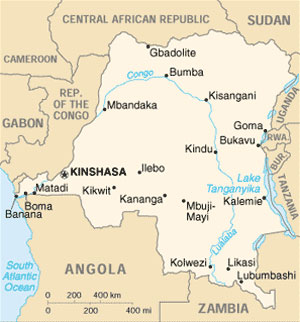 The last week in Goma, DRC has been very difficult. I spent three days working with Marie Gorreti Nyaungi, the President of a local association of women in community development. I have been working with Marie Goretti for a year – she is a nurse and is a vocal and passionate advocate for women and children. Her advocacy has resulted in her arrest on three separate occasions.

I traveled with her to Shasha village in the Maisisi Territory, and Mudja, a village next to the Virunga National Park and an ever-active volcano (the park is also home of the spectacular Mountain Gorilla). These areas, given their proximity to the forest, have been and continue to be areas of war and insecurity.

We met individually and briefly with about 500 women who had been raped one, two, and three times – primarily in the last 3 years and frequently by multiple men during the North Kivu wars and the horrific abuse and human rights violations of rebel leader Laurent Nkunda. Then I visited a site outside the remaining UN refugee camp in Munguga – we were able to talk to about 100 girls and women – all rape survivors and all living in the area of the camp with no food, medication or water. Women and girls risk their lives to go search for wood in the forest to sell to buy food – I talked to 10 women and girls who have been raped in the past 6 months while trying to find wood to sell.

Women get 100 francs (10 cents) for a bushel of wood. If the UN and international NGOs responsible for the camp (NRC and GLK) were providing humanitarian aid to the 5,000 primarily women and children in the camp, would women really risk their lives and rape for 10 cents to feed their children? It was explained to me this way by my Congolese colleagues. If the war and rapes ends, then so do the jobs for the international NGOs. So the Congolese say, “No Nkunda, No Job.” I do not want to believe the international community is so ineffective in its response that people believe that the NGOs are “entrepreneurs of insecurity” … but given what I have witnessed over the last three days, it is hard to think otherwise.