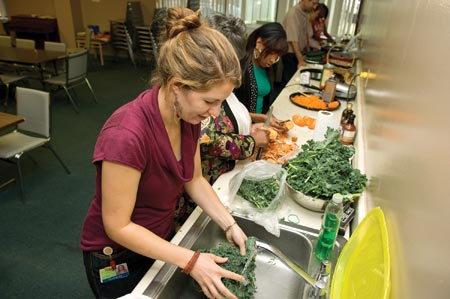 A national movement is under way to interest kids in healthy eating. With high-profile support from the likes of First Lady Michelle Obama and television chef Jamie Oliver (creator of

Exposure to cooking together is important “because it promotes family and quality time at home,” explains Hart, a member of the accelerated class of 2010. Hart wanted to introduce the middle schoolers to fresh, healthy ingredients that they can use at home with their families. The evening’s menu consisted of turkey and white bean chili, sweet potato and kale veggie burgers, zucchini pizzas, and fruit salad.

Kendell Jordan, a student from Tench Tilghman Middle School, chopped pineapple as he discussed the skills he was learning. “I don’t really know how to cook. When I come here, they teach us so when I cook something [at home] I already know the steps,” he says. Jordan had attended a previous intergenerational cooking event where he learned to make chicken stir fry, a meal he replicated at home for his family.

A senior resident of Apostolic Towers helped Jordan and his classmate, Joshua Grissom, prepare the stir fry meal. “It was delicious,” she says.

“They both said they wanted to be chefs!”

Grissom cooks regularly with his grandmother at home and says that his favorite part of preparing a meal is “You get to cook with other people.”

Many of the middle schoolers list ice cream, chips, and other packaged foods among their snacks of choice, but plan to incorporate some of the healthier foods they’ve been exposed to through the cooking series. Another Tench Tilghman student says that she cooks all the time at home, and will strive to eat healthier snacks “Most of the time, but not all the time.”