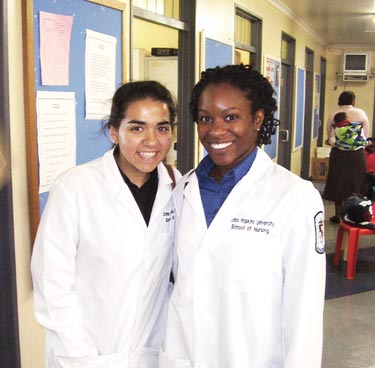 Before arriving in Durban, we would sit thinking about how it would be to live and do research in South Africa. We had been selected to participate in the Minority Global Health Disparities Research Training (MHIRT) Program for the summer after our first year of nursing school.

Unlike most of our peers who had accepted jobs as nurse externs all over the country, we were going to fly thousands of miles to do HIV/AIDS research in KwaZulu-Natal, South Africa, a province with one of the highest rates of HIV/AIDS infection. We reflected on the level of health disparities that we would see firsthand. Would it be similar to the health disparities in the U.S.? Or would they be disproportionately worse? We looked forward to seeing and learning how the healthcare system worked and how nurses operated within it.

There was so much to see and experience in South Africa. We toured facilities such as McCord Hospital and St. Mary’s Hospital, observed the nurse-midwives in action, and put our birth companion (doula) training to use.

At first glance, hospitals in the U.S. seem completely different and more advanced than some of the hospitals in South Africa; however, nurses in both settings are working hard to give their patients the best evidence-based care possible.

During our stay in South Africa we also had the opportunity to explore the country visiting Hluhluwe-Umfolozi Game Reserve where we saw four of Africa’s “Big Five”—lion, elephant, buffalo, and rhinoceros.

Most of our time, however, was spent conducting research in KwaZulu-Natal, where we studied the attitude, knowledge, and behaviors of minibus taxi drivers as they related to HIV/AIDS. We came into the study after data had been collected, and were excited to work with the data and to learn the process of data analysis. During our time, working with the data, we developed the SPSS database and performed the initial data analysis.

With every new endeavor come challenges that one must overcome. For us, those challenges were within our research experience as well as adjusting to cultural norms and living in the shadow of apartheid as American minorities. The Durban population is composed of mostly Black Africans and Asian Indians. Being two people of different color who lived, worked, and socialized together, we drew attention and curiosity, creating a constant reminder that we were living in a recently desegregated country.

With each experience, we were able to see and learn more about South Africa—its people, its healthcare, its culture, and the amazing things being done to minimize the health disparities being faced by South Africans on a daily basis.