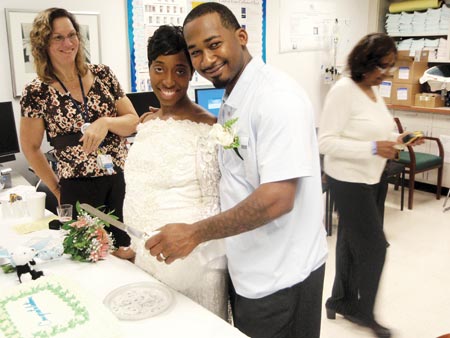 Tyra Logan doesn’t believe in superstitions. She and fiancée Noel Carter had no qualms setting their wedding date for Friday, November 13, 2009. The Waldorf, Maryland couple had big plans for the ceremony and reception at the Newtown Mansion in Upper Marlboro, but their baby—Logan was 33 weeks pregnant the week of her wedding—had other ideas.
On Tuesday, November 10, when her water broke, she went to a local hospital. Two days later, she was transferred to Johns Hopkins Hospital and admitted with pre-term labor, premature rupture of membranes and an unsigned marriage license. “I was thinking about the wedding a lot,” she admits. “I knew if I was in labor, the hospital wouldn’t let me leave. When I got to Hopkins, they told me that I was not going home, so I cried.” The couple called family and friends to notify them of the change in plans, and the vendors for the planned nuptials rolled with the unplanned and agreed to a future (and still unset) date for another reception.

But Logan and Carter still wanted to tie the knot before the arrival of their child, a desire Logan shared with Hopkins’ Cathy Trentacoste, RN. “We were talking, and I was upset,” Logan recalls. “I explained that we were still trying to get married.”

The Obstetrics nurses kicked into gear. “They just took the idea and ran with it,” Logan says. “Until the actual wedding day, I had no idea what they had done.” They spread the word, and offers of help poured in. “I knew this would be so exciting if we could help arrange it,” exclaims Trentacoste. “I love weddings.” She contacted the Hopkins chaplain, who in turn, agreed to officiate in the JHH Chapel. Hopkins nursing students on the unit made computer-generated decorations. Perinatal Nurse Manager Joan Diamond, MSN, RN, sprang for the wedding cake and flower bouquet out of the department’s budget. “At least ahalf dozen employees were involved in some form or another,” says Christina Meekins, BSN, RNC, Obstetrics Perinatal Clinical Coordinator.

Sticklers for protocol, the nurses kept to the “something borrowed, something blue, something old, something new” tradition. Blue, Logan’s favorite color, was coincidentally the accent for Meekins’ recent wedding. Meekins’ veil, dress and blue garter from her recent wedding doubled for “borrowed” and “old” after a little surgery. “We made a few quick, Saturday morning alterations to accommodate her cute baby bump,” chuckles Meekins, who believes this was the first wedding in the Hopkins OB unit.

The “new” (and also blue) was a blanket, a gift from the nurses that was both a practical and sartorial choice. Logan was transported via wheelchair to the chapel and reception—the doctors gave Logan permission to stand during her vows—and the blanket helped keep her warm. Because Logan arrived at Hopkins with only one pair of shoes—orange and blue flip-flops—the blanket also covered the fashion clash between shoes and dress.

After the ceremony, the decorated wheelchair with its “Just Married” sign and blue baby bottles and ribbons trailing behind it, made its way with a beaming and grateful bride to the reception in the small classroom on the Obstetrics unit. Nearly a dozen friends and family and numerous nurses attended the traditional reception with its donated wedding essentials: cake, toasting glasses for sparkling cider, cake topper, knife, server, feather pen and wedding favors made by Sharon Kanellopulos, RN.

“Everything was more than I could’ve imagined,” Logan says. “Everyone was wonderful and so genuine. The nurses made something special for a total stranger.” The next day, on November 15, son Logan Noel Carter arrived. After two weeks in the Hopkins NICU, his happily married parents took home their healthy son—and a great story to share about his birth. “Everything happens for a reason,” she reflects. “I shouldn’t have been in the hospital, but I have no regrets. I wouldn’t trade it.”