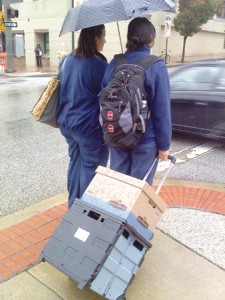 Caitlin McIntyre (traditional ’11), Anna Martin (traditional ’11), and Helen Thomas delivered three short, impromptu presentations about the importance of handwashing to parents and students at Back to School Night at Collington Square K-8, a public school in East Baltimore.

Courtney Barsotti, Jayoung Kim, Candice Williams, Megan Flora, Kylie Taylor, Melissa Paterakis, and Amy Hoffmann—all students in Shari Lynn’s Adult Health class—walked through the rain to pick up flu shot supplies at Hopkins. They continued through the pouring rain to deliver the supplies to the 911 Clinic, where they administered flu shots until the clinic closed that evening.

Anne Belcher, PHD, RN, AOCN, CNE, FAAN, presented the paper “Excellence in Teaching and Learning—Obtaining the Students’ Perspective” at the 39th Annual Meeting of the International Society for Exploring Teaching and Learning in Philadelphia in October. She also served as the convocation speaker at the West Virginia University School of Nursing graduation in Morgantown, WV in December and was the keynote speaker at the University of Maryland School of Nursing’s Excellence in Teaching Nursing conference in March.

Jennifer Wenzel, PhD, RN, CCM, has received a joint appointment in oncology through the School of Medicine.

Elizabeth Hill, PhD, RN, was named to the Editorial Board of Nursing Research for two years, effective January.

Deborah Gross, DNSC, RN, FAAN, has been appointed to the Institute of Medicine’s (IOM) Committee on Pediatric Health and Healthcare Quality Measures.

Diane Aschenbrenner, Shari Lynn, and Kathryn Kushto-Reese gave the pre-conference session on simulation at the 4th Annual National League for Nursing Technology Conference, hosted by the SON October 29-November 1. Aschenbrenner, Lynn, and Kushto-Reese also gave tours and demonstration sessions in the school’s research and SIM labs during the conference.

Betty Jordan, PhD, RN, CNE, FAAN, spoke on “The Rising Rate of Prematurity” at a summit in Columbia, MD in November.

Nancy Glass, PhD, MPH, RN, FAAN, presented “Factors Influencing the Exile or Reintegration of Rape Survivors in Families and Communities in the Democratic Republic of Congo (DRC)” at a conference on Children & Armed Conflict: Risk, Resilience, and Mental Health in Washington, DC in December.

Joan Kub, PhD, APHN, BC, was invited to be part of an Association of Community Health Nursing Educators (ACHNE) task force to propose recommendations for advanced public health nursing clinical preparation for graduate programs and credentialing.

Faculty, department of health systems and outcomes
Patricia Abbott, PhD, RN, BC, FACMI, FAAN, has been invited to serve on the International Program Committee for the IASTED International Conference on Health Informatics (AfricaHI 2010), in Gaborone, Botswana in September. In October, she was the plenary speaker at the Wolters/Kluwer 2009 AJN Nursing Conference in Chicago, IL, then participated in a technical expert panel (TEP) to provide guidance to an effort to synthesize learning from the Agency for Healthcare Research and Quality’s (AHRQ) Health IT program in December. She also presented Envisioning a Strategy to Prepare for the Long-Term Burden of HIV/AIDS: African Needs and U.S. Interests to the Institute of Medicine (IOM) committee in February.

Jo Walrath, PhD, MS, RN, received a $35,000 grant to study how to improve interprofessional communication. Funding is from Retooling for Quality and Safety: An Initiative of the Josiah Macy Jr. Foundation and the IHI Open School for Health Professions Institute for Health Improvement. 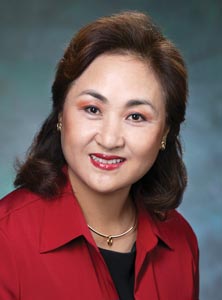 Miyong Kim, PhD, RN, FAAN, has been awarded a $3.1 million from the National Institutes of Health (NIH) to test a community-based glucose control intervention program for Korean-American immigrants who have type-2 diabetes mellitus. The five-year study, which started in September, aims to increase Korean-American patients’ ability to manage diabetes, which in turn will prevent complications.

Throughout her career, Kim has conducted immigrant-community-based, culturally-sensitive research aimed at educating people on better health and preventing disease. Kim also directs the school’s Center for Excellence for Cardiovascular Health in Vulnerable Populations, which works to reduce disparities in care and treatment. The research center recently received a four-year, $1.9 million NIH grant.

Four Hopkins nurse researchers were among the 117 presenters at the Southern Nursing Research Society’s (SNRS) 2010 Annual Conference in February. Their presentations include: