Thanks to these Bayview nurses, an Air Force dad was able to coach his wife through labor–from Afghanistan

Obstetrics nurses at Johns Hopkins Bayview Medical Center pride themselves on creating a personalized care plan for their maternity patients that combines compassion and expertise with sophisticated technology. But earlier this year Christy McPheeters, RN, received an unusual request from her supervisor. Joe Burns wanted to be with his wife, Amy (not their real names), during the birth of their first child, but he was stationed in Afghanistan with the U.S. Air Force. Could the maternity unit reach out to him electronically? 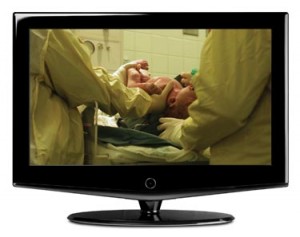 McPheeters was recruited for this special assignment because her husband also serves in the Air Force and frequently gets called overseas. “We try to accommodate all of our patients,” McPheeters said, “but this was the first time we had ever done a telecast delivery.” She describes the experience as new and exciting for her and an example of how accommodating the nursing staff is to its maternity patients.

The Freedom Calls Foundation, a nonprofit in Morristown, N.J., that offers free phone and video conferencing to U.S. troops, helped with the logistics. They arranged for Joe to be in a hotel conference center in Afghanistan where he could be connected to his wife in real time. The hospital supplied the television, a web cam that rotated 360 degrees, a speaker, remote control, and a microphone for Amy.

McPheeters admits that the presence of a TV camera in the labor and delivery room was an adjustment for her. Otherwise, her role was the same–being supportive of the patient, helping Amy push when appropriate and taking care of the new baby. Although the expectant father was physically thousands of miles away, his voice and persona were felt during his wife’s labor because of the video transmission and telephone hookup. The Air Force dad “was very personable and comfortable with the situation,” McPheeters said, which also helped her and Amy. “The couple were able to see and talk to each other” during what could have been an especially stressful event. The only complication was that the induction took longer than Freedom Calls had allotted. As a result, the new dad was no longer available by telecast, but he was able to be on the phone for the birth and able to take still photos of his new baby after the delivery. “The parents were very happy and grateful to have more than eight hours to spend together,” McPheeters said.

About six weeks later, the couple and their newborn returned to Bayview to express their thanks to McPheeters in person. Since then, the maternity unit has received a second request for the same service from an expectant mother who wants her husband, who is stationed overseas, to participate in the birth of their child–remotely. “We try to meet the needs of all of our patients,” said McPheeters. “But it’s nice to know that these options are available to military families.”