When the State of Maryland approved Suburban Hospital’s cardiac surgery program a few years ago, the hospital knew it had to be open to as many ambulance patients as possible. The problem was, Suburban’s emergency department (ED) was frequently overwhelmed and often had to close its doors to all but the most severe trauma cases. 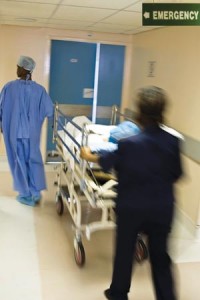 Two years ago those closures started to decline when the nursing staff initiated a patient-centered change in procedure that requires the cooperation of nearly the entire hospital. One of the motivators was a need to be more community-minded.

Diverting ambulances away from the hospital meant “we weren’t there for the public,” said Cindy Notobartolo, RN, corporate director of Suburban’s emergency/trauma, safety, and security services. “Their doctor and medical records might be here, but they had to go further away to another hospital.” The nurses at Suburban thought they could do better.

The new procedure, called Code C, consists of a comprehensive plan to improve the flow of patients from the ED–which can accommodate approximately 50 patients–to inpatient beds. Of all Suburban’s admissions, 75 percent come through the ED.

“We looked at best practices and principles espoused by the Institute for Healthcare Improvement,” said Notobartolo, “then we fashioned our own protocol.” Interdepartmental cooperation and communication are at its core.

The decision to begin a pre-closure alert rests with the ED’s charge nurse, who is “often in the best possible spot” to assess the situation, said staff nurse Mary Welsh, RN, TNCC, CCRN, PHN, who also serves as a relief charge nurse. An RN for the past 24 years, Welsh has worked in Suburban’s ED for the past six. The goal of Code C, she explained, is to prevent a closure by paging a team that includes representatives from nursing, the ICU, and CCU as well as Admitting, Housekeeping, and Transport Services. Everyone gathers in the ED to discuss next steps. Through an exchange of information and subsequent deployment of staff to different parts of the hospital, a closing may be averted. For example, the cardio-thoracic unit might be able to accept a patient from the ED on a temporary basis. Another patient’s admission might be sped up because Housekeeping dispatches a staff member to clean a recently unoccupied room.

Because of Code C “we now have a shorter prep time for moving patients from the ED to another floor,” Welsh said, “and we’re closing the ED less often.” During the last fiscal year, which ended June 30, for example, Suburban had reduced the number of ED closures by 50 percent, said Notobartolo.

The new system is better for patients, said Welsh. “They don’t have to go to a hospital where the doctor doesn’t know them and is further away for their families to visit.”

Notobartolo agreed. “Our patient satisfaction scores are up and a recent poll of area physicians in Washingtonian magazine indicated that Suburban Hospital was one of the best hospitals to go to,” she said.