Two years ago, the nurses in the Cardiac Intensive Care Unit (CICU) at Johns Hopkins Bayview Medical Center wanted to improve the chances of survival for patients experiencing chest pain and in need of angioplasty. In doing so, they had to “beat the clock” and extend themselves in unfamiliar ways. 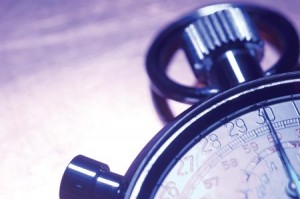 The clock starts when acute myocardial infarction (MI) patients enter the emergency department for diagnosis and referral and ends in the catherization lab. The state standard for door to balloon inflation time is 120 minutes. Bayview was taking slightly longer than that, but aspired to a more ambitious goal. “We wanted to go by the American Heart Association’s 90-minute standard because that was better for patients,” said Tim McFeely, RN, patient care manager of the CICU.

Closing that gap required ingenuity on the part of the CICU nurses and more than a little juggling. In addition to providing patient care on their unit, these nurses are responsible for codes, a hypothermia protocol for patients following arrest, and serving on a rapid response team. Then they added one more task. Eighteen CICU nurses out of a staff of 35 volunteered to be part of a “bridge” team to be cross-trained in the cath lab.

Here’s how the new procedure works. When a patient with acute MI comes into the emergency department, the CICU nurse goes downstairs to the ER to transport the patient to the cath lab. While waiting for other members of the team to arrive, this nurse stabilizes and preps the patient according to the lab’s protocols, remains present throughout the procedure, and then transports the patient to the CICU.

The bridge team began as a pilot in June of 2007. Since then, approximately 110 men and women have gone through this regimen, said McFeely, noting that “almost immediately we saw a huge improvement” in both the patients’ health and the nurses’ response time. In July 2009, the median door to balloon time at Bayview had been reduced to 70 minutes. “These patients used to be very sick,” said McFeely, “now they’re usually in the CICU for just one day.”

The bridge team has been a win-win for patients and nurses alike, says Heather Wilkerson, RN, CCRN, an advanced clinical nurse educator for the CICU.

Wilkerson and cardiac cath lab nurse Jeff Burkins, RN, trained their colleagues in the new procedure. “The nurses love it,” she said. “It makes them feel empowered, like they’re doing something worthwhile for the patient. In the past many of our acute MI patients died or suffered a poor quality of life after discharge and were frequently readmitted to the hospital. Now many of our acute MI patients walk out of here with their families. They may need to make lifestyle changes, but their outcomes are much improved.”

The nurses have benefited in other ways, says Wilkerson. “They’ve enhanced their skill set by developing a certain level of competency in two different entities of the hospital.”

Janet McIntyre, MSN, RN, CPHQ, senior director of quality and patient safety at Bayview, was so impressed with the CICU nursing team’s efforts to “go well beyond the call of duty” that she nominated them for a regional award from Advance for Nurses magazine. The CICU nurses earned best in initiative and second overall for the best nursing team.