A new, interdisciplinary OB Stat Team at Howard County General Hospital is engaging in intensive drills to help avert and respond to issues that may arise during pregnancy, childbirth, and puerperium.

“The biggest benefit of having such a team is the comfort level of the staff and physicians,” said Digna Wheatley, MHA, RN, Risk Manager at Howard County. Introduced in January 2009, the OB Stat Team went live after conducting a series of four drills over the course of three months. “By practicing the skills necessary for difficult situations early on, they can truly be ready in an emergency.” 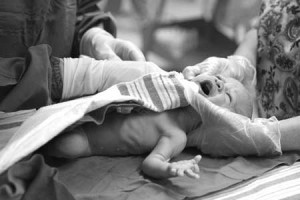 The OB Stat Team provides early intervention and stabilization for obstetrical emergencies throughout the hospital. Subdivided into teams Alpha and Bravo, the Team responds quickly, arriving on location in five minutes or less when an emergency situation arises.

Team Alpha, paged for most OB emergencies, is comprised of a labor and delivery charge nurse, anesthesiologist, obstetrician, obstetrical technician, pharmacist, unit secretary, respiratory therapist, lab personnel, and security. A chaplain is also part of the team, acting as a liaison between the patient’s family and the team itself.

For life-threatening emergencies involving antepartum/postpartum hemorrhaging, the Bravo Team is called. The group includes members of the Alpha Team plus eight additional staff, including a second anesthesiologist, neonatologist, pathologist, and Gyn/Oncologist.

Since going live, the team has answered six calls, and each emergency is another learning experience. For example, when the team recently received a call that a woman was going into labor in the lobby, they raced down the stairs to meet her—only to discover that the mother had been placed on an elevator going the opposite direction.

Such instances are documented by the primary staff nurse in both the medical record and OB Stat Team record. The charge nurse then completes a summary report to be reviewed in a later debriefing session.

“When reviewing the performance, we try to stay positive,” says Ellen Thompson, MS,BSN, RNC-OB, OB Clinical Education Program Manger. “We ask ‘What did we do well?’ and ‘How could we improve communication?’” By reassessing past situations and holding followup drills every six months, the team constantly strives for improvement and preparedness for the next obstacle ahead.

“Through the collaboration efforts of various disciplines, the team will have the resources necessary to overcome numerous obstacles,” said Judy Brown, MAS, RN, Senior Vice President of Outcomes Management at Howard County. “Every group has a role and we all move in concert.”