In January 2008, the Maryland Hospital Association (MHA) responded with the creation of the Nursing Retention Collaborative, an 18-month project spanning 26 hospitals, designed to help reduce voluntary turnover to five percent or less on an ongoing basis.

Carol Miller, RN, BSN, CCRN, patient care manager of the Bayview SICU, had just started her new position when she was asked to manage and organize her unit’s participation in this new collaborative.

“It was a lot of work,” Miller recalls, “and a lot of data collecting.”

Miller distributed surveys to the nurses in SICU to help assess qualitative performance. Unlike previous surveys, which ranked satisfaction on a “1–5” scale, nurses were asked to write narratives describing the nursing environment on their unit—what worked, what didn’t work, what they liked, and what needed improvement. 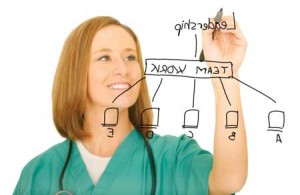 It didn’t take long for Miller to see a common thread in the survey responses: SICU nurses needed to improve their communication with one another.

“We started off putting an easel in the break room, where people could leave positive comments at the end of their shift,” Miller said. “Unfortunately, people were writing comments about the messes people were leaving behind, and so on.”

To better communicate about staff responsibilities, one of the charge nurses developed a room check sheet that covered the bare essentials of what needed to be done at the end of each shift. The checklist worked so well, it was shared with other units in the hospital.

In light of the success of the checklist, a daily goal sheet was developed and filled out by the charge nurse as a way of measuring whether the unit was meeting its goals. It too was adopted by other units.

“There were a lot of assumptions being made due to a lack of communication,” Hodges said. “Everyone seemed to be on the defensive because of a look, or something that was said and taken the wrong way.”

“We learned about constructive feedback, and that it’s okay to disagree, but more importantly, how to come to a resolution,” Miller said. “It was well-received.”

The result? Fewer complaints about communication styles, high SICU scores on the Safety Attitude Questionnaire (SAQ), and zero catheter associated bloodstream infections for the past 16 months. To date, the SICU turnover rate has dropped from 27 percent in 2008 to 18.4 percent.