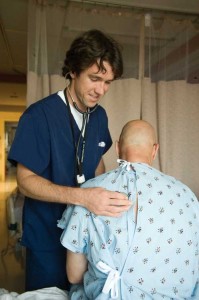 At a time when women are flocking to once male-dominated fields like law and medicine, men are slowly discovering the female-dominated field of nursing, with its relatively high pay, job flexibility, and manifold opportunities for advancement.

Students, alumni, and faculty at Johns Hopkins University School of Nursing say American concepts of masculinity, coupled with the power of language and a paucity of high-profile role models, keep men away at a time when demand for nurses remains strong.  But those men who do make the leap say they are glad they did, finding a challenging career with the kind of hours that allows time for family and recreational pursuits.

In 2006, Josiah Mueller ’09 found himself considering nursing after becoming dissatisfied with a career in finance at Campbell Soup Company. Preparing the perfect spread-sheet just wasn’t going to do it for him in the long run. Then a nurse who trained with him for triathlons suggested that he shadow her one day at her job.

“At first, it was – ‘Me, a guy? Nurse? I’m not sure about that,’” recalls Mueller, 28, who lives in Baltimore with his wife, Erin.  “But then I let my guard down and looked at it in an unbiased way. I really saw the positives. It’s a technical skill that’s highly marketable. I’d be able to go home at night and feel good about what I did. That’s not something everybody can say.”

In 2008-09, when Mueller enrolled in the traditional baccalaureate program, he was among 42 men attending the School of Nursing—six percent of its enrollment. He graduated this May, and in August will begin working as a clinical nurse in the pediatric emergency department at The Johns Hopkins Hospital. Nationwide, about six percent, or 168,000, of the nation’s 2.9 million registered nurses are men, according to the American Nurses Association. That’s up from 147,000 in 2000, and just 45,000 in 1980.

In the wrenching downturn of the American economy, nursing employment remains fairly strong. Mueller will earn about $60,000 in his first job out of school. Nurses with 10 years of experience can earn more than $100,000, and nurses with advanced degrees, such as nurse anesthetists, can earn up to $180,000.

At The Johns Hopkins Hospital, men comprise 10 percent of the nursing staff, and practice throughout the hospital—from intensive-care and acute-care to pediatrics and radiology. Men are featured in hospital recruitment literature and nursing administrators say they often recruit at the School of Nursing and from military installations in the region.

“We are pleased to be above the national average on our recruitment and retention of men,” says Karen Haller, PhD, RN, FAAN, Vice President for nursing and patient care services. “However, we are far from satisfied. Trying to run a profession—nursing—by only drawing on half the population is untenable. It’s one of the root causes of the cyclical nursing shortages.”

Among the recent recruits is Ronald Noecker ’07, who works in an oncology unit at the Sidney Kimmel Comprehensive Cancer Center. Noecker, 51, decided to pursue nursing while living in Guatemala, contemplating his future service to the world after spending 18 years as a priest. In 2003, he volunteered at a hospital where men comprised a significant part of the nursing staff and were respected members of the community. He found Hopkins’ nursing program online, was accepted, and began a professional journey that continues in Baltimore.

“It has been a deep experience at Hopkins,” says Noecker, the lone man on his nursing shift. “I have great respect for my colleagues. A lot of guys aren’t aware of what kinds of abilities are needed to be a critically thinking nurse—at any one time, you could be an engineer, a manager, a shrink.”

Men, such as associate professor Daniel Sheridan, PhD, RN, FAAN, are making breakthroughs into practice areas once reserved solely for women. Sheridan, who became a nurse after working as an operating room technician in the Air Force during the Vietnam War, is one of two men licensed in Maryland to conduct exams of women who have been involved in sexual assault.

Sheridan, who has a doctorate in nursing, says a man can perform such work with caring, empathy, and professionalism.

“I’ve never had a woman say she didn’t want me to do the exam,” says Sheridan.

Others have found jobs with unusual hours that provide breathtaking amounts of free time. Dennis Jones, MS, RN, CFRN, an instructor at SON, serves as a flight nurse on the STAT MedEvac helicopter service at The Johns Hopkins Hospital, where he works just ten 24-hour shifts every 42 days.

Many staff nurses, meanwhile, work 12-hour shifts. At The Johns Hopkins Hospital, that translates into 10 shifts over 21 days. The work settings also provide flexibility for those looking for new opportunities.

“I tell men and women thinking of entering the field that it’s the kind of career where you can change what you do every year and never do the same thing twice,” Jones says. “There are so many options—emergency room, anesthesia, the recovery room, psychiatry, out-patient clinic, the hyperbaric chamber or on a hospital floor.”

Those options, though, have yet to provide a huge draw for American men, who have largely shied away from the field. One problem, men say, is the perception of the job as “women’s work” or serving as handmaiden to an all-powerful physician who gives them orders to carry out. That’s not the reality in many nursing settings, where nurses are on the frontlines in the fight against disease, evaluating patients, making independent decisions on their care, and working on a team with physicians.

There’s also modern culture’s depiction of nurses in television shows and movies. In the 2000 hit movie, Meet the Parents, actor Ben Stiller plays a nurse, whose chosen profession is ridiculed around the dinner table by his girlfriend’s father and family. He’s gay-baited, called “Florence Nightingale,” and questioned by his girlfriend’s father, played by Robert DeNiro, about the dearth of men in the field.

“The image that was projected was pretty negative,” says Assistant Professor Jason Farley, PhD ’08, MPH, CRNP, an adult nurse practitioner at Johns Hopkins HIV/AIDS service. “That’s what we are battling against.”

They also battle against the profession’s name: nurse. Men in nursing bristle at being called a “male nurse,” saying it’s like calling someone a “female doctor” or “female lawyer.”

“It’s an unnecessary distinction,” says SON Clinical Instructor Bernard Keenan ’86, MSN ’93, who works in The Johns Hopkins Hospital Department of Psychiatry. “It portrays men as outliers in the field.”

Keenan was one of three men in the graduating class of 1986 (the first class to graduate from the University-based School of Nursing) and the first to serve as president of the Johns Hopkins Nurses’ Alumni Association.

He’s working to change the stereotypes of nursing, and points to a recent patient in the Emergency Department as an example. “He couldn’t quite conceive of a man working as a nurse,” says Keenan.  “What made the situation even more confusing was that my colleague was a female physician, and we were dressed nearly identically. The patient kept calling me ‘Doc’ and referring to her as the nurse.”

Men entering the field must be prepared to deal with the recurring questions from patients and their families: Are you gay? When are going to become a doctor?

“I tell them I’m quite happy being a nurse,” says Keenan. “It’s interesting that the women’s movement exposed women to all the opportunities that were once just for men. But there hasn’t been much in the other direction, saying that it’s okay for men to stay at home with their children, or that men could be nurses.”

Men, meanwhile, are joining together to provide support and recruit other men into the field.

In 2008, Mueller organized the Hopkins Men in Nursing student group, which met monthly over the past year. Topics include how best to recruit men into the field, how to support men already there, and how to deal with issues that arise in classes such as obstetrics/gynecology and labor and delivery.

“A lot of the guys felt it was awkward in those classes,” he recalls. “I didn’t have the same experience.”

After joining The Johns Hopkins Hospital staff, Mueller plans to keep in touch with the men at SON. He’ll be back to meet with the group, to answer questions about what it’s like on the job, encourage the students to shadow him at work, and be available for support.

“There is femininity attached to the title, ‘nurse,’ but the more you learn about nursing, you realize that the job is less gendered than you may have thought,” he says. “My first job is working with children. They are very complex patients. It’s a challenge that I’m really ready to tackle.”