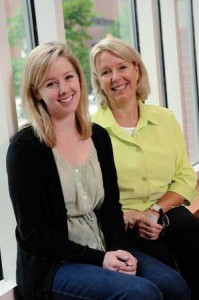 “I have two women to look up to who influenced me to become a nurse,” says Mary Plumb, accelerated ’09. In her family, nursing is a legacy.

Plumb’s mother, Susan Cooley King, is a nurse and new member of the Johns Hopkins University School of Nursing Advisory Council. And Plumb’s grandmother, King’s mother, is Louise Thomas Cooley, a Hopkins Nurse from the class of 1947.

“My mother, and now my daughter, are both Hopkins nurses,” boasts King, who describes herself as ‘just’ a nurse. She is used to the teasing from Cooley, her mother, who tells her “You might be a nurse but you’re not a Hopkins Nurse!”