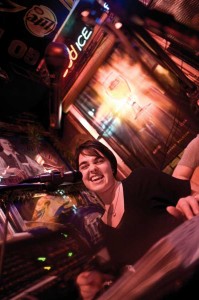 Outside the weathered door of Leadbetter’s, a decidedly downscale (and proud of it) bar in Baltimore’s Fells Point, the bitterness of a colder-than-normal January has all but cleared the streets. But inside, a nice crowd has gathered to listen to Katie Bowers and Joe Scala, who begins to strum his guitar. Bowers’ soulful, husky voice rolls into a Carole King cover, and with eyes closed, she gives the song-and the rest of the hour-plus set-everything she has.

It’s a far cry from her day-job as a nurse in The Johns Hopkins Hospital’s Department of Psychiatry, where Bowers works with geriatric and chronic pain patients. “Performing is completely different from nursing, and I love that,” reflects Bowers, who received her nursing degree from Villanova. “It’s like I have an alter ego that comes out every once in awhile. It’s a stress reliever.” She’ll sing to patients if they ask, a request that means reaching beyond her bar-gig catalog of songs from the 1970s to today’s music. “We’ll walk around the hall and sing songs, like ‘Cheek-to-Cheek’ or ‘Hey, Good-Looking,’ chuckles Bowers, 24, who joined the Hopkins staff in October 2007.

Bowers grew up in Sparta, New Jersey in a household filled with music and nursing. Dad is a salesman and mom is a nurse, but both performed on weekends. Her father accompanied his daughter during her high school talent show performances, and until Bowers and her fiancé Scala, a computer software designer, moved to Baltimore, Dad was part of the group. She also plays the guitar, but at Leadbetter’s, she lets her vocal prowess shine. “Music has made me more confident, and to some degree, made me who I am,” she says.