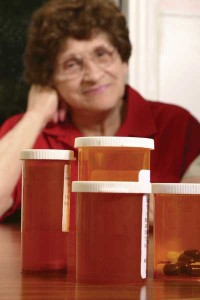 It has been said that every day, at every age, we do one of two things. We either build health or produce disease in ourselves. A host of genetic, biological, social, psychological, and environmental stressors affect mind and body daily. We know, for example, that socioeconomic status, race, and ethnicity have an effect on our health and wellness across a lifetime. Poverty, homelessness, and disability, too, take a toll on wellness and longevity, as do behavioral issues such as anxiety, stress, and depression.

A growing body of research suggests that late-life disability, illness, and premature mortality are the result of how an individual’s body adjusts to those stresses and the cumulative effect of a lifetime of adjusting to those stressors. And, in the face of the most significant economic crisis since the Great Depression, a new stressor has been added: financial strain. In fact, according to assistant professor Sarah L. Szanton, PhD, RN, and professor and Associate Dean for Research Jerilyn K. Allen, ScD, RN, FAAN, worries about finances may outstrip socioeconomic status, ethnicity, or disability as a predictor of premature death among older women.

Reporting in the Journal of Gerontology: Social Sciences, Szanton and Allen found that, without regard to race, age, education, absolute income, insurance status, and illness, older women expressing greater levels of financial stress are 60 percent more likely to die within five years than their less-financially stressed counterparts. Their longitudinal analysis of 728 women between 70 and 79 years of age also found the impact of financial stress on the likelihood of death within five years among older African-American women to be 2.5 times higher than among similarly economically stressed older Caucasian women.

Moreover, the perception of financial strain, particularly among African-American women, may be a better predictor of mortality than actual income because, in contrast to the latter, the former focuses directly on financial adequacy. The authors caution, however, that other factors-neighborhood effects, historical health disadvantages in African Americans, etc.-may explain or contribute to the racial differences in mortality among the older women in the study. Nonetheless, the findings lead Szanton to conclude that, “Money worries can be a significant social determinant of ill health and even death in later life. If we can help address the sources of the financial strain for older adults, such as the monthly costs of multiple medications and health care, we may be able to help reduce the toll economics takes on life and health, particularly among African-American women.”