Critical care nurses must possess a thorough understanding of physiology and pharmacology, be confident using a vast array of medical equipment, yet demonstrate equanimity and com-passion in a hectic environment. “When you’re critically ill, it’s like being in a hurricane,” says Julie Stanik-Hutt, PhD, ACNP, CCNS, an expert in critical care nursing and associate professor at the Johns Hopkins University School of Nursing. “There’s wind, rain, water, darkness. It’s the nurse who takes your hand and stands with you in the eye of the hurricane.”

At 12:56 p.m., the alarm blares and the phone rings in a double-wide trailer at the edge of Baltimore Harbor. Flight nurse Eric Leslie ’99, examines the text message on his cell phone:

1:00 p.m. Leslie and partner March Burchard, CFRN, board a bright blue medevac helicopter. As the two-engine craft ascends and heads west toward Howard County Hospital, a dispatcher radios that their patient is an alert 60-year-old male with a myocardial infarction.

This is Leslie’s second call of a 24-hour shift that began at 6 a.m. He has been a flight nurse for four years, working for the Johns Hopkins/STAT Medevac Flight Program. He began dreaming about this career while doing his senior practicum under clinical instructor Dennis Jones, MS, RN, CFRN, now the flight team’s lead nurse. He loves his job, says Leslie, though being a flight nurse is somewhat manic-long periods of quiet alternating with high–adrenaline assignments.

1:23 p.m. In the Howard Emergency Department, the patient appears calm, but an EKG monitor shows the signature of a heart attack. The nurses will transport him to the cath lab at Johns Hopkins Hospital. The team’s primary mission is to transport patients from one hospital to another that can provide a higher level of care.

Leslie switches the patient’s IV lines from the hospital’s to his own portable system. Burchard does the same for the monitoring equipment. They work swiftly, speaking little.

1:49 p.m. The red “H” of the Johns Hopkins Hospital helipad comes into view. Leslie has spent the flight observing the patient’s heart monitor, which showed no new developments. An uneventful flight, he says, is a good flight.

The Point Person for Tracheotomy 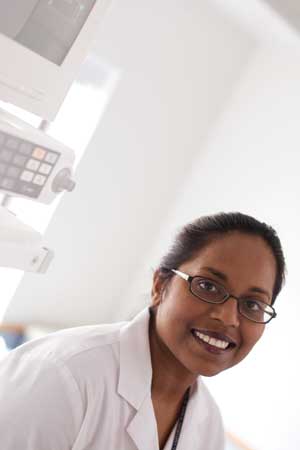 After a critically ill patient has been intubated and on a ventilator for several days, the patient’s intensive care team might consider performing a tracheotomy. The surgical procedure involves making an opening in the trachea and inserting a tube to provide an artificial airway that will allow a patient to breath more easily. Candidates for the procedure include critically ill patients who have been on a ventilator for a long time. Reaching this juncture in a patient’s medical care can be wrenching for both patients and their families, says Vinciya Pandian, MSN ’04.

“People think, ‘Oh, my God, a tracheotomy, is this the end of my loved one’s life?'” she says. “And physicians may not have the time to explain the procedure to the family to allay their fears and clarify their doubts.”

Pandian is there to help.

As the tracheotomy nurse practi-tioner for Johns Hopkins Hospital, Pandian screens critically ill intubated patients to identify candidates for tracheotomy. She also collaborates with ICU teams to decide whether to perform the tracheotomy, and educates patients and families about the procedure. She is currently the only nurse practitioner dedicated solely to coordinating all facets of managing tracheotomy patients.

A tracheotomy is a vital step–and may be a permanent one for some patients, says Pandian. But she has also seen the procedure improve the quality of life of many. Why some patients fare better than others is not well understood, says Pandian, and is a subject she plans to pursue through the School’s PhD program, in which she is currently enrolled. “If I can do research and publish in this area,” says Pandian, “many more patients will benefit.” 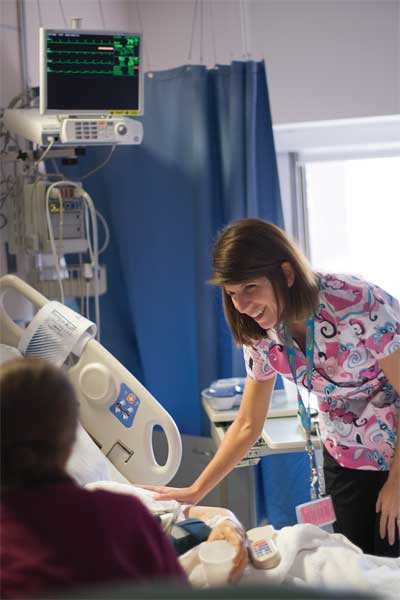 “In the CCU, the unexpected is all the time,” says Deb Kraft, RN, a nurse clinician in the Johns Hopkins Hospital Coronary Care Unit (CCU). At any moment, a stable patient might become unstable. “A very slow day can turn into a chaotic day,” says Kraft.

Hospitals began introducing CCUs in the 1960s, and early on, doctors realized that specialized nurses like Kraft would be key to their success. Hospitalized heart attack patients were grouped in one area of the hospital equipped with necessary cardiac drugs and equipment, and registered nurses were trained to recognize and treat potentially fatal arrhythmias without the assistance of a physician. The results were astounding. As more CCUs came online, survival rates for heart attack patients climbed.

Today, while the equipment found in the CCU is more sophisticated than it was 40 years ago, and new innovations such as intravascular cooling machines have been introduced, the fundamental role of the critical care nurse remains the same, says Kraft-to practice “watchful vigilance.”

“You have to be in the patient’s room every hour at least,” she says. “Sometimes you don’t leave the room for several hours. You might be titrating medicines constantly, checking an alarm, seeing to a patient who needs to be suctioned. You’re constantly anticipating what might come next, and moving on to the next event. You get used to the feeling of always being on guard.”

Change Happens All the Time 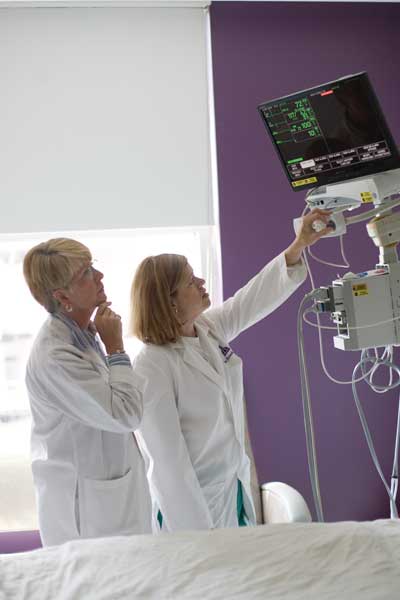 Nothing is constant in the ICU, says Cathleen Barenski, ’98, MSN ’03, a nurse practitioner at the Johns Hopkins Hospital Weinberg Intensive Care Unit. No day is routine, no two patients are the same, and no patient stays the same for very long.

“A patient who seems semi-stable can become critical in a matter of minutes,” says Barenski. “You have to think fast.”

Thinking fast might mean grabbing the crash cart and starting CPR. It can also involve deducing the source of a problem. If a patient’s blood pressure plummets, for example, is it because he is in cardiac arrest? Or could it be that he has a tension pneumothorax, a build-up of air in the lining of the lungs that can block blood flow to the heart?

“The best critical care nurses are always anticipating,” adds Donna Prow, BSN, RN, the unit’s nurse manager. They are constantly vigilant for changes in a patient that may signal a problem, and they are also acutely aware that any small change they make, even adjusting a ventilator a tiny amount, can have a profound effect.

Prow and Barenski acknowledge that the unpredictable nature of ICU work is not for every nurse. But they both say they can’t imagine working anywhere else. “I like to take on challenges,” says Barenski, who entered nursing at age 34 and has made three trips to Africa as a missionary.

“I love using my mind, thinking through, problem solving,” says Prow. “I love being busy.”

Sleuthing For Clues That Could Save a Life 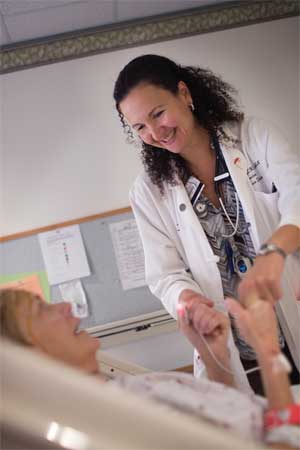 “Can you tell me today’s date?” Filissa Caserta, MSN ’03, asks a middle-aged man who is a patient in the Johns Hopkins Hospital Neurosciences Critical Care Unit.

“Good,” says Caserta, who is conducting a systematic neurological assessment that she calls “a walk around the brain.” The questions are carefully designed to test the competence of different brain regions. Opening questions-“What’s the date?”-take a sounding of the frontal lobe, seat of consciousness and memory. Next, Caserta poses questions that probe the parietal lobe, specifically its language abilities. “What’s this?” she asks, pointing to a watch.

Then, the nurse gauges the health of the cerebellum, the center of coordination and motor control: “Touch your nose and touch my finger.” Finally, she assesses brainstem function by, among other things, testing the patient’s ability to move various parts of his face, whose nerve endings connect directly to the brainstem.

A bedside nurse generally repeats these tests every hour or two and reports any changes. Even a slight decline in performance, says Caserta, could signal brain swelling, stroke, bleeding, or another dangerous change.

Neuroscience cases are like a puzzle, says Caserta. “The nurse has to pick up on the subtle changes in the exam. Subtle changes can be the difference between life and death.” 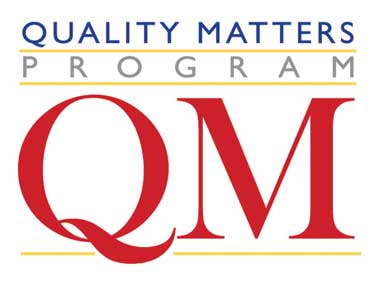 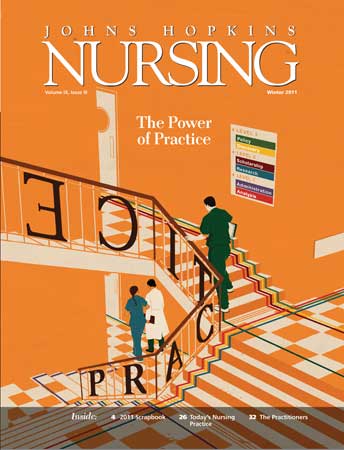