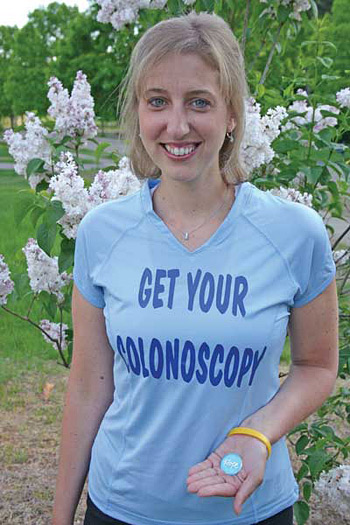 Last May, eight days after her graduation from nursing school at Johns Hopkins University, Kelly Carpenter ’07 was diagnosed with colon cancer.

She was 28, planning to move to California to pursue her career as an oncology nurse. Her diagnosis came the day before she was set to move. “I went home to an empty apartment and went, ‘Oh no,'” Carpenter said. She changed her plans and returned home to Essex, VT, to live with her parents. They helped her survive, Carpenter said.

When her chemo treatments ended on December 31st, Carpenter told herself: “I’m going to start 2008 off right.” In May, she attended and volunteered at the Stowe Weekend of Hope, an annual retreat for cancer survivors, friends and families. She lived in a house with other young survivors – a group of people who face their own set of challenges after a cancer diagnosis.

“I think in planning for the future, it’s a lot different,” Carpenter said. … “You have to think about, when you’re faced with cancer, you have to come to terms with death, basically. Which is not really something that you think about before this.”

Carpenter is a graduate of Essex High School [Essex Junction, VT], who went to the University of New Hampshire, where she majored in social work. Later, she chose to earn her second degree, this one in nursing.

She thought her gastro-intestinal symptoms were due to the stress of ending nursing school, before her cancer diagnosis.

“It’s kind of a shock,” Carpenter said. “You look at it definitely as an eye-opener on all the good things that are in life. I realized how lucky I am in a lot of ways and how many good people I have in my life. I think I was overwhelmed with the gratitude I felt for how many people came out of the woodwork and were so giving of themselves to make my life so much easier. But there are times when I obviously think, ‘What now?'”

Carpenter sometimes talks with her patients about her cancer and what her treatment entailed. She thinks it’s helpful for her, and hopes it is for her patients, too, to talk with somebody who has an understanding of what they’re going through.

“When you’re diagnosed, it’s very much an emotional diagnosis, too,” Carpenter said. “It’s nice to sympathize with one another and relate to somebody.”

Reprinted with permission from the Burlington Free Press: May 2, 2008. www.burlingtonfreepress.com 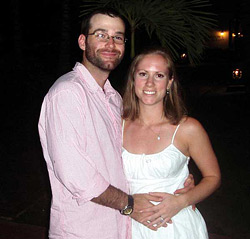 Both Travis Devolt and Marta Lea had expectations when they arrived at the Johns Hopkins University School of Nursing, ready to embark on a new career path. But neither could have foreseen the way that their time in Baltimore would end. This summer, just months before moving to the west coast, Travis and Marta were married in Jamaica. The festivities included beach barbecues, scuba diving forays, and sunset sails with friends and family. In hindsight, it seems safe to say that they made a very good choice in coming to Hopkins.

Travis and Marta met soon after starting the accelerated BSN program. Both attended a mixer for new students at a local pub. Once they had been introduced by a friend of Marta’s, they quickly developed a friendship. They sat next to one another in every class and saw each other often outside of school. Eventually, according to Travis, “we said, ‘hmm… we could be dating.'”

A few months after they began to date, Travis and Marta traveled to Venice together for a luxurious spring break, albeit on a student budget. They stayed in a room without a bathroom, ate adventurously (not always by choice), and endured a 24-hour travel fiasco on their return trip. And yet, against all odds, Travis and Marta each realized that they had had a great time together. “That really sealed the deal,” says Travis. Their personalities seemed to compliment one another perfectly. Travis describes himself as mellow and laid-back, while Marta says that she is driven and “sometimes a little high-strung.” According to Travis, “I help her to relax and she motivates me.” On their next vacation, in the Dominican Republic, they decided to marry.

Two years after their 2006 graduation from the accelerated pro-gram, their lives have been full of surprises. Marta works as a labor and delivery nurse at Saint Agnes Hospital in Baltimore, where she provides care and education to mothers and infants during and after birth. “I wouldn’t have guessed that this is what I’d be doing after school,” she said. “But now that I’m doing it, I couldn’t imagine doing anything else.” Travis works in the Emergency Department at Johns Hopkins Bayview Medical Center, where he enjoys the fast-paced atmosphere. “Every day has potential for variety,” he said. “As a nurse, I’m constantly evolving and learning. I learn something new each day I go to work.”

In the months after the wedding, Marta and Travis plan to move across the country to Seattle, where Marta will begin working on an advanced nursing degree and certification. Travis, who enjoys hiking, skiing, and kayaking, is looking forward to the outdoor opportunities that Seattle has to offer. He hopes to continue working in an Emergency Department after the move.

Asked about their thoughts on the future, Travis – the casual one – thinks for a minute. “I hope the rain doesn’t bug us too much,” he says. Considering how happy Marta and Travis are together, that seems doubtful. 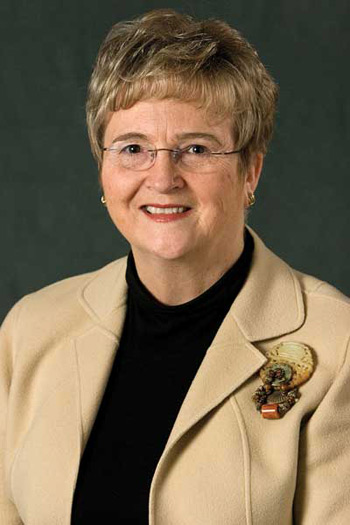 Jayne Felgen ’65 vividly remem-bers the day of her grandmother’s death in Sidney, Ohio. As a small girl, Felgen wasn’t allowed past the waiting room; family members who were not registered nurses were denied access to patients whose lives were ending. The hospital staff simply informed the family that their loved one had died-alone, and without the comforting presence of family members.

“The transformative experience shaped me and affirmed what I am as a human being,” said Felgen. “Ultimately, it cemented my commitment to becoming a nurse.” Now, with a career in nursing that has spanned more than 40 years, Felgen has emerged as a national leader in health care, working to ensure that “professional practice is more than customer service.”

In her chapter on caring and healing in Relationship-Based Care (which was the American Journal of Nursing 2004 Book of the Year), Felgen explains that an effective nursing environment allows each nurse to bring his or her expertise to bear in every instance of patient contact. A comprehensive approach to patient care isn’t merely a matter of patient satisfaction; it has been proven to significantly improve patient outcomes. Felgen writes that “an intentional caring relationship between a caregiver and the patient and his or her family is the core of the healing environment.”

The values that are at the core of Felgen’s work have resonated strongly across the nursing world. Through her leadership, Felgen has given voice to thousands upon thousands of nurses, patients, and families who view human dignity as the starting point for effective health care.

She has worked tirelessly–friends call her “The Energizer Bunny”–to improve the experience of patients and their families by promoting quality primary care. Felgen is president of Creative Health Care Management and has served as clinician, administrator, educator, and consultant in hospitals and other settings. She is also an acclaimed writer; recently her book I2E2: Leading Lasting Change, a guide to affecting change to all levels of an organization, was named the American Journal of Nursing 2007 Book of the Year.

A few years ago, Felgen had a first-hand experience with the changing hospital environment during one of the most emotional times of her life. After a long fight with chronic illness, her mother passed away in Sidney, Ohio, where Felgen’s grandmother’s life had ended years before. The experience contrasted sharply with her memory of her grandmother’s passing. The staff was focused on the well-being of the family members, who did not feel rushed or out of place as they began to come to terms with their mother’s passing. As a result, Felgen feels at peace with the way in which her mother’s life ended. “I was so grateful that my family could experience the very best of care in the very worst of times,” she wrote in Relationship-Based Care. “They are so proud of my being a nurse. And I’ve never been so proud to be a nurse as at that moment.”