Photos by Will Kirk 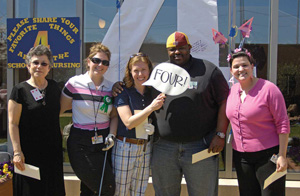 The 2008 rankings from U.S. News & World Report’s “America’s Best Graduate Schools” were cause for celebration around the halls of the Johns Hopkins University School of Nursing (JHUSON) this spring. The school’s master’s programs were ranked fourth among peer institutions, the highest ranking in Nursing’s 23-year history as a division of the university. In previous reports published in 1998, 2001, and 2004, the JHUSON ranking ranged from 5th to 6th and each year was tied with other institutions for these spots.

In the category of Community/Public Health, a hallmark of nursing education at Johns Hopkins, the school continued to be named second in the nation, a ranking it has held since the category was introduced in 2001. In Nursing Service Administration, the school rose to 7th place from a previous position of 10th.

In a schoolwide announcement, Dean Martha N. Hill, PhD, RN, FAAN, congratulated the JHUSON community, noting, “Each and every one of us has contributed to creating the academic excellence, the schoolwide values, the local to global leadership, and the continued growth that has brought us this recognition.” 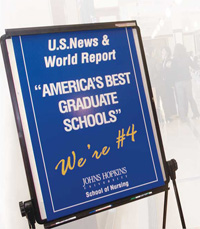