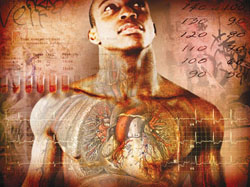 Controlling hyper-tension among African American men living in urban areas has long posed a challenge. Many in this high-risk group are without a regular source for hypertension care “and the perception was that they would be difficult to engage and follow,” notes School of Nursing faculty member Cheryl R. Dennison, PhD, CRNP.

Participants were between 21 and 54 years of age. Some 71 percent earned less than $10,000 per year, 58 percent had never married, and 64 percent had been incarcerated. The study had a high attrition rate, primarily due to death and incarceration. Fifty-three men died during the course of the study, more than half from narcotic or alcohol intoxication or cardiovascular and cerebrovascular disease.

“The high mortality rate in this group of young men illustrates a major societal and public health problem,” notes Dennison. But there were hopeful signs as well. With the exception of those who died or were incarcerated, study tracking and follow-up rates were exceptionally high, exceeding 89 percent of available men during five years.

Dennison and colleagues were buoyed by the high follow-up rates and the success in reducing blood pressure among a high-risk group facing a host of societal and economic challenges. But, cautions Dennison, “to achieve sustained blood pressure improvement and reduction and prevent premature death in this high risk population, we must address not only hypertension care issues but social and economic challenges such as substance abuse, unemployment, and lack of insurance at the policy level as well.”