Homecoming: Save the Date!

Susan Riddleberger ’73 and I are on the committee for Homecoming, scheduled for September 29-30, 2006. With a “Maryland” theme, it will be a not-to-miss event. I hope to double the number of the 36 CHH alums who attended last year. SEE YOU AT HOMECOMING!

After numerous requests, I found a jeweler who will make the CHH pin! Mr. Fino is a master jeweler who took digital pictures and measurements of my pin and promises an exact replica for those who want to replace this precious momento. To order your pin or pin/pendant combination in 14K gold for $250, contact Mr. Vito Fino c/o Fino Jewelers; 9650 Belair Road; Perry Hall, MD 21236; 410-256-9555.

Updates Keep the updates coming. Thanks to Kathy Johnson ’52 who sent in the address of Grace Carpenter Blain ’53. I was glad to hear from Kathy Milholland ’71 who found out about the CHH merger with Hopkins through a Hopkins SON faculty member.

To ensure everyone continues to receive mailings, please send any address or telephone changes and deceased names to:

In 1933, an unknown graduating senior presented a print entitled “First Home” to junior Emily Ruark. This was the beginning of one of the best kept secrets under the Church Home dome. 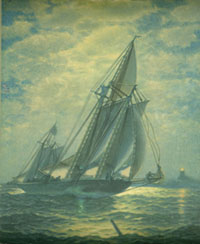 Each year, the print was bestowed upon an incoming senior who valued the art, science, and spirit of nursing, and held the vision of a true Church Home nurse. The student was permitted to tell only their family and one classmate, and was required to take the print home for the year rather than display it in her dorm room. When the time came to pass it on, the traditional signing and dating was done.

According to past recipients, the print told a story of its own. The Lighthouse represents the Nurse, a beacon of hope, security, and awareness who guides patients and gives them strength. The patient is represented by the ship tossed at sea, perhaps lost, and in need of the nurse’s guidance and reassurance. The nurse, as a “Beacon of Hope,” guides the patient to a safe harbor with the hope of renewed health and security.

When the award surfaced at the closing of the school of nursing in 1976, it came as a complete surprise to both faculty and alumnae-all those except, of course, this select group who had received the award:

This framed piece of history can be seen in the JHUSON lobby.