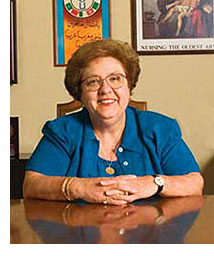 If M. Louise Fitzpatrick has a philosophy about nursing education, it would go something like this: We can’t be isolationists. Nursing has to address the needs of all people and the more that students are exposed to people of different races and cultures, the better nurses they will be.

As Dean of the Villanova University College of Nursing in Pennsylvania, Fitzpatrick, who received her nursing diploma from Hopkins in 1963, has created opportunities for students to work in a wide range of settings, from impoverished villages in Peru and Nicaragua, to a Native American community in Nevada, to England and Ireland. And the exchange goes both ways: She has established strong ties with teaching hospitals in Jordan and Oman, welcoming students from those countries to Villanova.

Fitzpatrick is biding her time when it comes to sending American nursing students to the Middle East, as many students and their parents are wary of political and cultural circumstances in that part of the world, she says.

Recently, Fitzpatrick, who has been dean at Villanova for 27 years— longer than any other nursing school dean in the U.S.—received the National League of Nursing award for outstanding leadership in nursing education. Fitzpatrick established graduate studies in nursing at Villanova and created a doctoral program using distance learning technology. Her academic work has been in the area of preparing faculty and nursing education, but she has hardly been cloistered in academia. “I know what’s out there, and I want students to know, too,” she says.

Fitzpatrick credits her public health nursing experience at Hopkins, as well as the period just after graduating when she worked as a visiting nurse in East Harlem and the Bronx, for broadening her perspective throughout her career. “My experience at Hopkins gave me the opportunity to see beyond the hospital walls,” she says. “It gave me an early exposure to the things I knew I really wanted to do.”