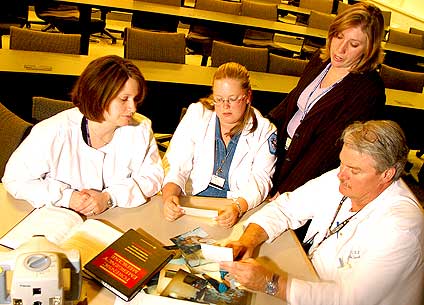 From left: Dawn Van Pelt, MSN ’05; Linda Fernandes, MSN ’05; and Katherine Nash, MSN ’05; with mentor Dan Sheridan, are set to make their marks on the field of forensic nursing.

Forensic nursing is one of the fastest growing specialties within nursing practice, according to Dan Sheridan, director of the program at the School of Nursing. “The field is growing to meet the increased recognition that many of the patients that we serve have been victims of criminal activity or injured in a way that may lead to civil litigation,” says Sheridan, who is current president of the International Association of Forensic Nurses (IAFN).

Unlike their professional counterparts—legal nurse consultants—forensic nurses are trained to work directly with victims. “Johns Hopkins forensic nursing students get a lot of experience in wound identification documentation, forensic terminology, as well as in courtroom testifying,” says Sheridan. “And inherent in the definition of the clinical nurse specialist, of course, is the role of educator.”

Linda Fernandes was recently hired by the Delaware Public Defender’s Office as a forensic nurse, a position supported by the Delaware Criminal Justice Council’s Byrne Grant. “Forensic nursing is basically the overlap of medicine and the law,” explains Fernandes. “Our role is not to determine guilt or innocence, but to ensure the best quality of care for our patients.”

Fernandes reviews felony and capital cases to determine whether or not the charges match the injuries, and watches for inconsistencies. “I look at the medical records, autopsy reports, toxicology reports, and sexual assault reports, and write an objective report for the attorneys,” she says. “I may find mitigating circumstances that could influence the defendant’s sentence or lead to treatment for a past psychological trauma.”

“Linda has brought great enthusiasm to her position,” says her supervisor Lisa Schwind, herself a nurse and attorney. “The Hopkins training is just superb. As one of the first graduates of the program, I’m sure she had her choice of employment, and we’re really happy she chose to work for us.”

For Katherine Nash, who has been accepted into the Johns Hopkins doctoral nursing program, the path to forensic nursing was through the emergency room. “I attended a seminar where Dr. Sheridan spoke on forensic nursing and showed lots of slides, and I found it so exciting. I called the admissions office and told them, ‘I’ll see you in the fall!’”Nash began teaching at the school this summer and is also an on-call Sexual Assault Nurse Examiner (SANE) for Montgomery County.

Dawn Van Pelt’s inspiration to pursue an advanced degree in forensic nursing came as a result of a child abuse case she encountered while working in Johns Hopkins’ Pediatric Intensive Care Unit, where she currently works. “I noticed marks on the child’s back, which were later proved to be a result of abuse,” says Van Pelt. “I became interested in the concept of having someone based in the ER whose role is specifically to look for that sort of evidence.” Eventually, Van Pelt plans to work as a forensic nurse in a community hospital’s emergency room developing evidence collection and victim identification programs, and educating staff to follow proper forensic procedures.

Sheridan is optimistic about the future of forensic nursing. “There is a growing recognition that the nurse is an extremely knowledgeable and credible health care provider, able to accurately assess injuries, determine mechanism of injury, and conduct interviews,” he says. “Law enforcement and other agencies are just beginning to discover forensic nurses.”