Over the decades, the colors and styles of nursing uniforms at Johns Hopkins have changed with the times, affected by everything from wartime shortages to the changing demographics of nursing.

Adapted from the text of the exhibit “A Century of Changing Fashions”,
curated by Phoebe Evans Letocha 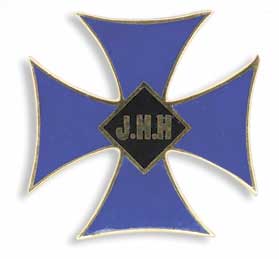 Throughout the 20th century, the starched white uniform has symbolized the image of nursing. During this period, however, nurses and nursing students have in fact worn a wide variety of colors and styles. At Johns Hopkins and many other schools of nursing, the uniform’s color has played an important role in designating status within the training and professional ranks. In the early years of The Johns Hopkins Hospital Training School for Nurses, for example, students wore pink cotton dresses during their probationary period and then blue cotton ones for the remaining years of training. Only graduates of the training program were entitled to wear white. For many years, the superintendents of the school wore elegant black silk dresses.

As societal fashion changed over the decades, so too did the nursing uniform, though often only after considerable discussion. In 1916, for example, at a May 26 meeting of the Alumnae Association, members talked at great length about whether nurses should be given the option to wear white shoes (as an alternative to the required black shoes) with the Johns Hopkins uniform. “When the Johns Hopkins Hospital uniform was made, white shoes were not in vogue,” noted alumna Virginia McMaster Foard at the meeting, continuing, “Now they are an absolutely common thing. South of Virginia, everyone wears white shoes.”

With the advent of World War II, the uniform worn by Hopkins nurses, both students and graduates, changed dramatically. In 1941, the long fitted skirts and aprons that had been worn during the first part of the century gave way to shorter sleeves and skirts. The new uniforms were one piece instead of having several pieces that had to be laundered separately–a change that occurred because of the need to conserve materials and labor during the difficult war years. Preclinical students during this period wore tan lab coats over their civilian clothes, with brown shoes and tan hose, prompting Mabel Gerhart, 1953, to later look back and note in a scrapbook, “With our brown uniform, shoes, and hose, the group of us probably looked like one big dark cloud in the hospital halls.”

Over the next several decades, from the 1940s to 1969, the blue student uniform remained largely unaltered. Then, with students entering in 1969, the school unveiled a new uniform made of Perma-Press blue/gray fabric that–in keeping with the times–was shorter than previous uniforms. Evidently, it was not short enough for some students, who rebelled against regulations by hemming their skirts above the knee to reflect the popularity of the miniskirt.

Around this time, the school also admitted the first men into its nursing programs, creating a need for the design of shirt and pants uniforms. Beginning in the mid 1970s, after the opening of the Johns Hopkins University School of Health Services, female students either continued to wear dresses or could choose to join the men in wearing pants and shirts during their clinical rotations. 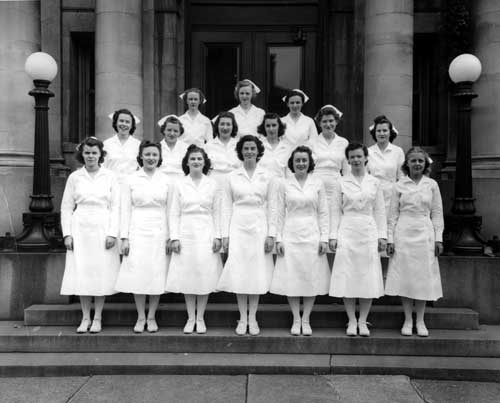 Currently, Hopkins nursing students wear white and navy blue uniforms with a school patch sewn on the left sleeve and the school name embroidered on the left breast. In most settings, students wear a white polo shirt with navy pants or skirt and navy or white shoes and socks. Graduates wear a wide variety of colors and styles of clothing. Today the uniform as an identifying symbol of the nurse has lost some of its resonance as the trend has moved away from uniformity and toward a greater diversity in the style, fabric, and color of their clothing.

Special thanks to Mame Warren, author of the soon-to-be-completed history of Johns Hopkins Nursing, Our Shared Legacy, whose research contributed to this article. 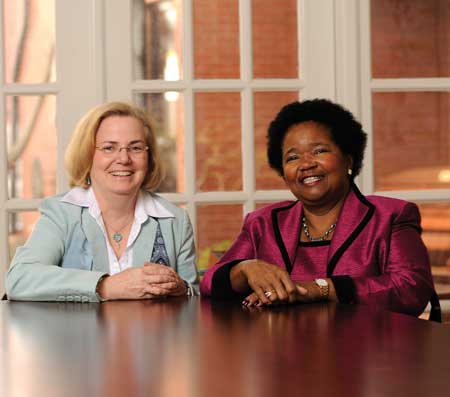 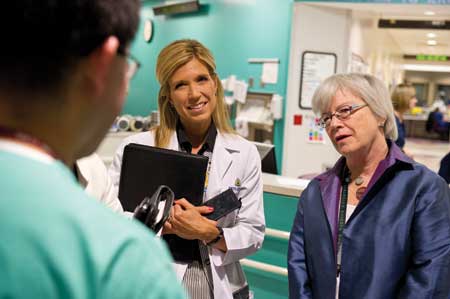