Nursing can be all-consuming. That may be why the nurses you’ll meet here have cultivated outside interests—from knitting to swing dancing—with such passion. They pursue their hobbies in order to recharge, forget, focus, relax … and in the process, find themselves better equipped to meet the challenges of their profession. 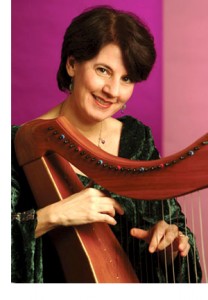 Marguerite Kearney spends her days investigating the effects of estrogen deficit on the platelet, an important element of blood coagulation. Her hobby, by contrast, is much more fanciful, taking her to a world in which stories and music make magic happen.

Kearney is a celtic harpist. She and writer Susan K. Wooden make up the duo called Kilda. For the past two summers, the pair has performed at numerous venues including the Potomac Celtic Festival.
Traditionally harpists tell stories while playing music. Wooden creates stories based on poems, which she recites, while Kearney creates and plays music that relates to the stories. “I fit the music to match the tale,” says Kearney.

While what Kearney earns for her performances isn’t enough to make a living, playing the harp is something she enjoys doing as a sideline. “It is something totally unrelated to nursing,” she says. “We don’t talk about nursing; we tell stories about fairies, magic, and mystery. It’s just very soothing.” 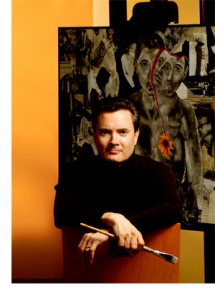 Once an opera singer who performed with the Baltimore Opera Company and now a nursing student, John Cotterell’s artistic interests of late have turned to painting and drawing.

Cotterell became passionate about opera in college, where he earned a degree in visual and performing arts. But then he felt like it was time to “be responsible,” and to him that meant getting married and working in the family business.

More than 20 years later, Cotterell has found a place for himself in the field of nursing and will graduate from the school’s accelerated program in July. But his artistic side still lives. As an abstract artist, he works on large surfaces (typically 5’x7’) with water-based media like acrylic or water-soluble pencils and crayons. He and his wife, Dianna, an RN and artist as well as photographer, have adjacent studios in their townhome, where they compete for wall space to display their work.

Although the schedule of an accelerated student is very intense, Cotterell keeps a work-in-progress on the easel in his studio to ground him during stressful times.

“I will also occasionally work some ideas in miniature on postcard-sized pieces of heavy poster board,” he says. “It’s an effective break from studies and recharges my right brain.”

While his continuing studies at the Maryland Institute College of Art have been temporarily interrupted, Cotterell plans to eventually earn a painting certificate. “I hope that I can develop my own unique artistic vision over the next few years,” he says, “and perhaps get gallery representation and manage some income from this hobby that I enjoy.” 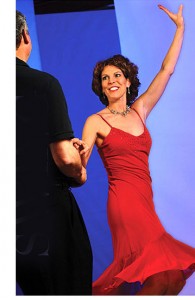 When Lori Edwards began her doctoral studies four years ago, she rekindled her lifelong passion for dance by taking lessons at the Friday Night Swing Dance Club, a locally run dance organization that gathers more than 200 people every Friday night. Once the dancing student, Edwards is now the teacher, helping owner Chuck Alexander teach each week.

“Dancing has been an essential part of my life since I began my doctoral program. Without it, my life would be all work and all school,” Edwards says. “Dancing gives me an outlet. When I’m dancing, I’m not thinking about work or school.”

She continues, “The beauty of dance is that it is a social connection to people. You get to meet people from all walks of life.”

Edwards points to health benefits as well, including a recent study published in the New England Journal of Medicine that found that active leisure activities, such as swing dancing, can lower the risk of Alzheimer’s disease. “Swing dancing combines all aspects of the functions of the brain,” she says. “It’s a wonderful combination of the music while you’re thinking and you’re moving.”

In addition to swing dancing, Edwards also enjoys Latin and ballroom dancing. Her enthusiasm for dance has spread to those around her, including School of Nursing instructor Diane Aschenbrenner, who began taking lessons two years ago and is now a regular at the Friday Night Swing Dance Club. “It’s been the best thing that’s happened to me,” says Aschenbrenner. “It’s a stress reliever, it’s a lot of fun, and it’s cheaper than therapy!” 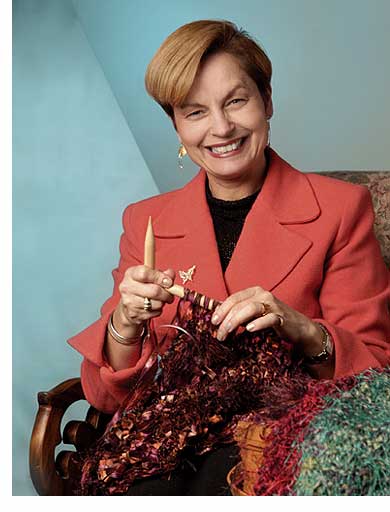 At last year’s School of Nursing faculty and staff retreat, Cynda Rushton sat among her colleagues with the usual preparations: handouts, notepad, and pen. She also brought with her a unique set of supplies: a ball of yarn and knitting needles.

Rushton knit throughout portions of the retreat. She often knits during conferences and meetings, obtaining permission ahead of time. She is quick to point out it doesn’t mean she is not paying attention. In fact, she says, knitting helps her to listen and to integrate information.

Rushton began knitting in first grade. By the third grade, she had completed a classic gray cardigan that her daughters still wear. She fell away from her hobby after college and didn’t take it up again until six years ago. She went to the yarn store, picked out a nice yarn, knitted an entire sweater, and then realized it was too small. Rushton chose to unravel the entire sweater and try again. “That was such a valuable lesson in life right there,” says Rushton. “Sometimes you need to learn to let go and start over.”

Rushton’s daughters, Hilary and Callie, ages 10 and 12, are also avid knitters. The three Rushtons, together with a friend, made 42 scarves last fall. They held a sale at their home in December and sold all of the scarves to neighbors and students from the girls’ school. Without taking a break, Rushton immediately started work on a sweater for herself.

Knitting has become a spiritual practice for Rushton, whose area of nursing expertise is palliative care. “Palliative care is all about connecting to the spirit,” she says. “I think [knitting] would be great for patients, their families, and their nurses and caregivers.” 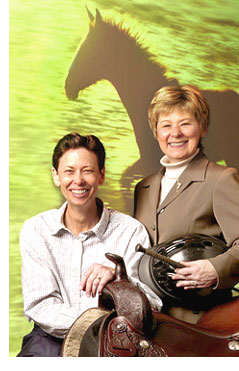 As a child growing up in California, Gayle Page would save up her allowance to ride horses. She remembers being “insanely jealous” when a friend got her own horse. Jeri Allen, like Page, was also a horse lover as a little girl, but she never even got the opportunity to ride one.

Today, both women are avid horsewomen. For Allen, it took a nasty turn in the weather two years ago to get her up in the saddle. She was hiking at Gunpowder State Park one day when a thunderstorm hit. Seeing a big barn at the top of the hill, she ran to it for cover. Inside she found a group of people riding horses and taking lessons. “There I was 55 years old, and I had never been on a horse!” she says. “I thought, I’m going to explore this!”

Allen started taking horseback riding lessons at the large farm near her house, and was soon drawn to Foxy, a 17-year-old horse she currently leases and plans to buy.

Page acquired her horse, Tramp, three years ago for her son, Colin, to show and ride in competition. When he lost interest and some knee injuries sidelined Page from playing tennis, she decided to keep Tramp so that she and daughter, Lauren, could ride him. After a year and a half of work, Page says Tramp is now a responsive, cooperative, “two-rider” horse. On weekends, she helps ready him for Lauren, 13, to show; on weeknights, she leaves the School of Nursing to visit him at the stables in Pasadena, Maryland.

“The outside world does not exist when I’m with Tramp, and it’s the same way when I’m in the animal labs,” says Page, whose research focuses on the immune system in rats.

For her part, Allen says horseback riding provides her with physical exercise, psychological therapy, and a new group of friends. “Horseback riding is a total release from anything else I do,” says Allen, who conducts research in cardiovascular health. “When you’re riding, you have to concentrate on the messages you are giving the horse, so you can’t worry about other things.” 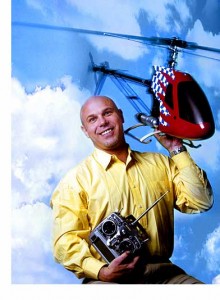 Michael Marino’s hobby has taken him coast-to-coast for competitions, winning him merchandise and trophies, and even the offer of factory sponsorships. Wherever he is competing, his attention is always drawn skyward, to the helicopter he is controlling by radio from the ground.

A native of California, Marino grew up flying with his dad and uncle who are private airplane pilots. He started flying radio controlled airplanes in the late 1980s. About five years ago he befriended an experienced helicopter pilot who introduced him to helicopters and taught him model helicopter theory and building.

“During the first year I spent countless hours flying and building helicopters,” Marino says. “I went to my first competition that year, and I was hooked.” The copters weigh in at about eight pounds and are about three feet in length. Competitors are judged on their ability to control the helicopters through a series of flight maneuvers.

Marino will graduate from the School of Nursing with a BSN this May. His interests lie in critical care nursing, and he plans to gain experience working with critically ill patients. Eventually, he may leave his post on the ground and take his place inside a life-sized helicopter. 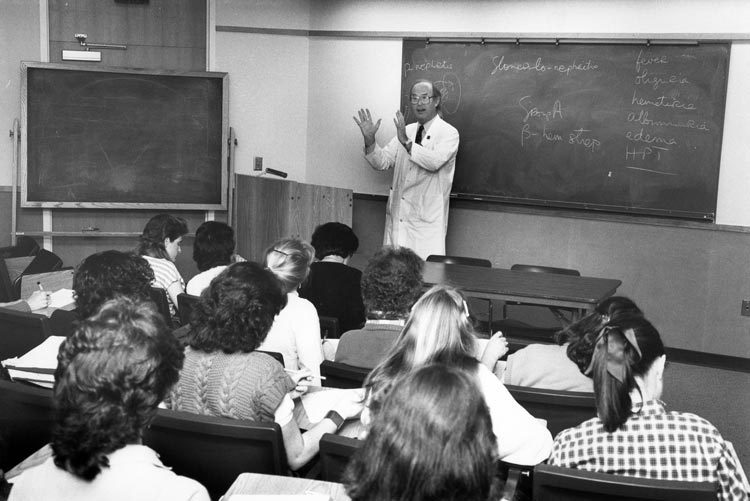